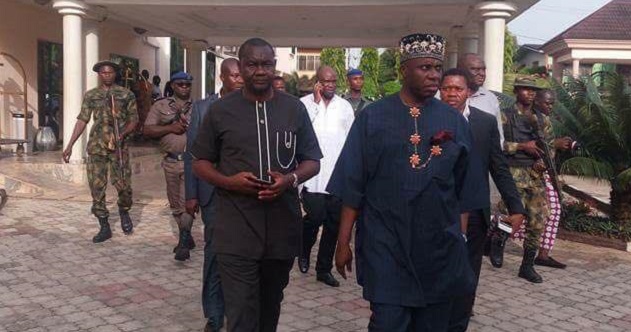 Minister of Transportation and former governor of Rivers State, Rotimi Amaechi, has rejected the words of Magnus Abe, the senator representing Rivers South-East, labelling him (Amaechi) his leader.

Last week at the secretariat of the All Progressives Congress (APC), Abe had described Amaechi as his leader.

But reacting in a statement on Sunday, Amaechi said Abe was being deceitful and thus rejected the claim.

“I am not Magnus Abe’s leader. Abe has long left me and the political family that is largely responsible for his rise and fame in politics,” Amaechi said.

Amaechi also accused Abe of sponsoring people against him.

He said, “How can I be Abe’s leader when he and the minions sponsored by him (Abe), privately and publicly abuse, insult, cast aspersions etc on me, my wife and members of my family, daily? Is that how a follower treats his Leader?

“It’s cheap and indeed shameful political sophistry for Abe to stand in the APC secretariat and deceitfully say I am his Leader, while all he has done, both privately and publicly in recent times is to undermine me, the APC and desecrate the APC in Rivers State. As a matter of fact, it is indeed very doubtful if Senator Abe is still in the APC. He mouths APC but his actions belie his words and clearly tell a different story.”

He said Abe is not committed to the APC and his actions have weakened the party in Rivers State.

“Such a hypocritical, devious character cannot be my follower. I am not his Leader,” he said.

Both men have been locked in a bitter political battle in the state, centred around control of local structure and choice of key political aspirants.