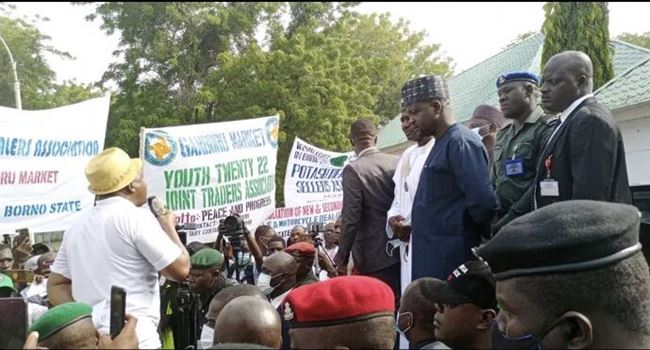 Some residents of Borno State have taken to the streets to protest the dissolution of the Special Anti-Robbery Squad (SARS) by the federal government on Sunday afternoon.

There have been ongoing protests in major cities nationwide for the dissolution of the SARS unit of the Nigeria police.

But the Borno protesters made up of members of the civil society, comprising the organised labour, and the Nigeria Bar Association said the police unit has been involved in “life-changing” missions, hence, should not be disbanded.

“We in Borno State need more presence of SARS operatives than their disbandment,” said Ahmed Shehu, the chairman of CSOs in Borno, who spoke on behalf of the protesters.

“The issue of insecurity has not abated in Borno. As I am speaking to you now, people cannot travel out of Maiduguri to the nearest village due to insecurity.

“We know all the efforts of both the state and federal government towards ending the insurgency, but we still don’t have the peace yet.

“For both government and humanitarian workers to travel from Maiduguri to the LGAs, we need the security escorts and the only security that is always available to provide that service is SARS.

“All checkpoints mounted in the roads are not manned by any other security personnel but SARS. Without SARS we are would all be nowhere in Borno.

“It was the same (SARS) that saved the day when the governor’s convoy was attacked. That was why we were shocked when we heard that SARS has been banned. As a people, we acknowledge the grievance of fellow citizens from the other parts of the country. But we also have to appreciate others as well. If SARS is doing bad in other regions, SARS is doing good in northeast Nigeria and Borno state in general.