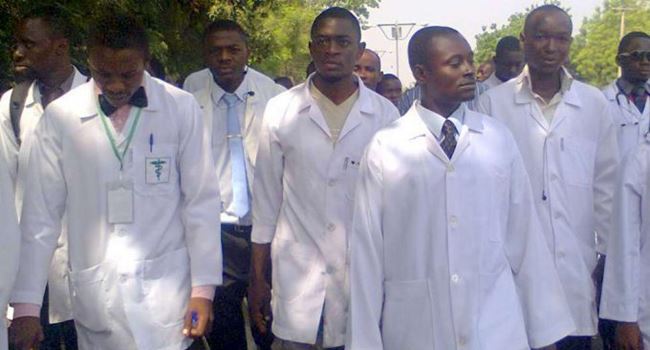 The Governor of Ekiti State, Dr. Kayode Fayemi, has warned striking doctors under the aegis of National Association of Government General Medical and Dental Practitioners (NAGGMDP) to suspend their strike action to avert forcing him to invoke the ‘no work, no pay rule’.

The doctors have been on strike since the 30th of June, 2020 after the expiration of the 28-day ultimatum issued to the government to protest alleged wage disparity, unpaid backlog of allowances, among other matters.

Fayemi gave the warning on Wednesday in Ado-Ekiti during a statewide broadcast.

The governor, who called on the striking doctors to suspend their action in the interest of poor citizens who could not afford to seek treatment in private hospitals, said though their arrears of unpaid allowances can be collected, a life lost cannot be reversed.

‘We can always collect arrears of unpaid allowances, but a life lost cannot be reversed. That is why I should like to call on the doctors to take the patriotic route like other health workers and the organised labour for an immediate end to the needless strike.

“I do not want to be put in a situation where I have to invoke the no work, no pay in Ekiti,” he warned.

According to the governor, he was more worried that workers, who got promoted five years ago have not enjoyed financial benefits of such elevation, saying it wasn’t his style and intention to deprive people of their legitimate entitlements.

“I am pained in my heart that people who got promoted since about five years ago have not enjoyed the corresponding financial benefits. These are things which give me great pain and which I am absolutely committed to assuaging their feelings”.

Speaking further, Fayemi explained that the government was unable to pay workers’ accumulated benefits due to drastic reduction in the federal allocation.

“Ekiti had consistently received from the Federation Account, an average N3billion in the last six months with a monthly wage bill of N2.8bilion.

“Apart from the fact that our monthly received federal allocation has dropped considerably because of low crude prices and off take, our internally generated revenue has gone worse as many businesses that should pay taxes are themselves under different government supports to stay afloat”, he said.