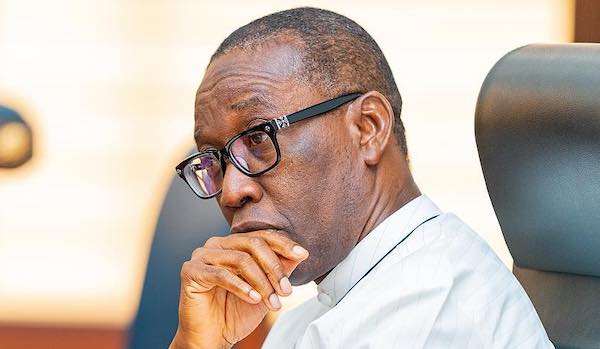 Delta State Governor, Ifeanyi Okowa, on Saturday faulted the Senate President, Ahmad Lawan, and other individuals over their public condemnation of the southern governors for demanding the country’s restructuring.

Lawan had on Thursday said it was unacceptable for the governors and other elected officials to lead the agitations for Nigeria’s restructuring.

The Buhari Media Organisation (BMO), a group that is sympathetic to President Muhammadu Buhari also challenged the governors to channel their demand for devolution of powers, state police, and fiscal federalism among others to the National Assembly.

However, the House of Representatives had distanced itself from the statements credited to Lawan on the matter.

In his address at an empowerment scheme initiated by the Minority Leader of the House of Representatives, Ndudi Elumelu on Saturday in Asaba, Delta State, Okowa said it was totally wrong for anybody to attack the governors for demanding the country’s restructuring.

He thanked members of the lower legislative chamber for distancing themselves from Lawan on the matter.

He also challenged other leaders in the country to emulate the governors.

Okowa said: “We reaffirm, as elected governors, we believe in the unity of our people. That cannot be a reason for us to be vilified.

“When we sit at the table, we will be able to discuss best what is good for Nigeria.”

The governors had during a meeting held on Tuesday in Delta banned open grazing in the Southern part of the country in addition to other key decisions on national issues.

I can’t be cowed, ban on open grazing final – Wike

No alternative to Gov Sule in 2023 – Nasarawa speaker