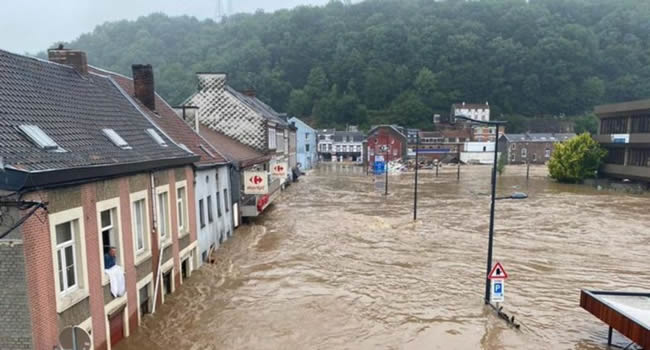 The death toll in Germany from the worst flooding in over 200 years rose to at least 21 as dozens of people are still missing, police said Thursday.

This was also confirmed by a BBC report which disclosed that the worst of the flooding has been in the state of Rhineland-Palatinate, where a lot of people have been waiting on rooftops to be rescued.

At least 30 people are missing in the hilly Eifel region after several homes collapsed.

Much of the flooding was triggered when the Ahr river, which flows into the Rhine, burst its banks south of Bonn.

Malu Dreyer, chief of the Rhineland-Palatinate state, described the flooding as a “catastrophe”.

“There are dead, missing and many people still in danger,” she said. “All of our emergency services are in action round the clock and risking their own lives.”

Dreyer’s comments were echoed by Armin Laschet, premier of North Rhine-Westphalia and the conservative candidate to succeed Chancellor Angela Merkel who toured the crisis-hit region earlier in the day.

“I am shocked by the disaster that so many people have to suffer in the flood areas. My condolences go out to the relatives of the dead and missing. I thank the many tireless helpers and emergency services from the bottom of my heart,” she tweeted.

Police helicopters and the army have been deployed to some areas to help stranded residents.

Some schools have been closed, while rail and road transport links have been severely disrupted around the west of the country.