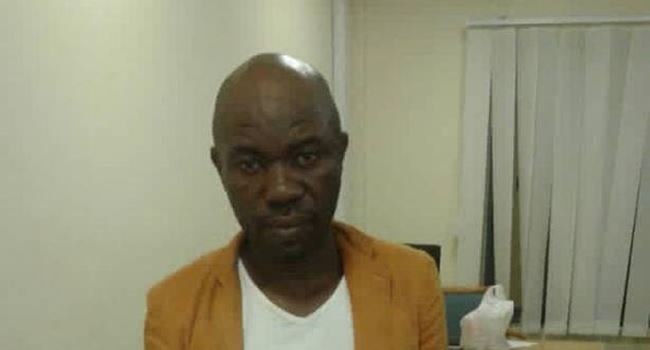 A mild drama played out at the Lagos office of the National Drug Law Enforcement Agency (NDLEA) in Murtala Muhammed International Airport (MMIA) when a suspect arrested with 7.1 kg of methamphetamine worth over N2 billion began to question journalists.

The suspect, Aniede Chimezie Bright who was arrested on Sunday during the outward clearance of passengers on Royal Air Maroc heading to Spain had concealed the illicit drugs in food spices in his suitcase.

However, the drama ensued when he was paraded on Wednesday and asked what led him into drug dealings.

He flared up, asking if the politicians accused of corruption have been arrested or charged to court.

“There is no road, there is no common water. Nobody is saying anything. You people are not doing your work.

“Where are the politicians? Look at the country we are living in, you guys are not doing your work. Have you gone to Aso Rock?”

Asked why he carried the substance, he said, “I don’t know about it. I was just tricked into it. When I get to the court, I will explain to the judge.”

The Commander, MMIA Command of the NDLEA, Ahmadu Garba, said, “Unarguably, the closure of borders occasioned by COVID-19 pandemic is responsible for the surge in the price of these drugs. For instance, the price of meth in Australia has increased from 200 dollars to 600 dollars per gramme due to supply cut, hence the desperation by the traffickers and barons alike.”