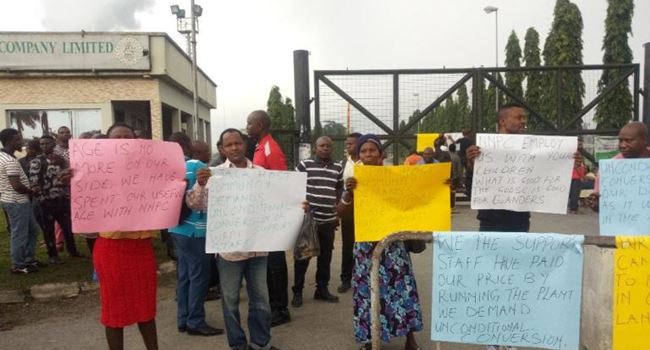 Protesting staff members of the Nigerian National Petroleum Corporation (NNPC) on Sunday held their service within the premises of the Warri Refining and Petrochemical Company in Ekpan, in the Uvwie Local Government Area of Delta State.

The workers had, since last week Wednesday, been protesting the non-regularisation of their engagement.

The service reportedly held amidst downpour while the workers sang worship songs and engaged in prayers to seek divine intervention.

More than 500 support staff members, who were joined by youths across the Niger Delta region have been expressing their grievances over failure by management of NPPC to honour an agreement reached to convert them to full staff members.

The staff reportedly placed a coffin at the main entrance of the refinery on Friday while insisting they would not back out of the protest until their demands were met.

Production and other economic activities at the Warri Refinery had been fully grounded by the protesting workers.

To resolve the protest, the workers called on the Group Managing Director of NNPC, Maikanti Baru, to personally wade into the matter.

It was gathered that the workers had staged a protest in May where the management assured them that the conversion would be finalised by mid-June.

Meanwhile, some of the workers had reportedly worked for eight to 28 years as support staff members.