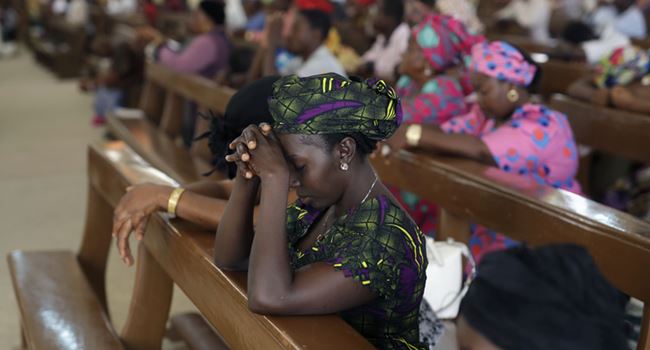 There was drama on Sunday in Lugbe, a satellite town of the Federal Capital Territory (FCT), Abuja, as three pastors denied their members.

The clergy were trying to evade arrest for holding church services in defiance of the ban against large gatherings in the country.

The three pastors of new generation churches, Ibitoye Kayode of the Liberty Faith Gospel Church, Joshua Olaniru of Liberty Gate Ministry and Vitalis Udeazi of Dominion Chapel, were said to have mingled with their congregations upon sighting the Ministerial Enforcement Team, denying being pastors.

The enforcement team, while acting on a tip-off, stormed the mountain top in Sabon-Lugbe where they arrested the three pastors for violating the ban on congregational worship in the nation’s capital.

The pastors were however identified from the crowd after a brief interrogation, though Udeazi struggled to conceal his identity.

According to Udeazi, none of his members was present at the time the taskforce arrived the mountain top. This did not go down well with other pastors who protested vehemently that he was one of them.

His identity was however revealed when some members in the crowd identified him as their pastor, while Olaniru was also exposed by a resident of the community who tendered a video clip to the taskforce where the cleric was holding a worship session.

Chairman of the taskforce, Ikharo Attah, queried the pastors for denying their members.

“Why are you all denying these large groups of worshippers? No one among you agreed that anyone came to worship with them even when they turned out in large numbers. One of you even went ahead to deny being a pastor,” he said.

Another pastor, Effiong Bassey of the Holiness Revival Ministry Church in Karamajiji, who was holding a church service to mark the 60th birthday of a retired military colonel, P.E. Ebong, who left the military in 2015, was also arrested

Addressing the pastor, Attah said: “You cannot hold a worship service in defiance of the directives of the Commander-in-Chief just to mark the 60th birthday of a retired colonel.

The clerics, who were consequently arraigned before a Mobile Court presided over by Magistrate Idayat Akonni, were found guilty and fined N5,000 each in addition to three hours of community service.