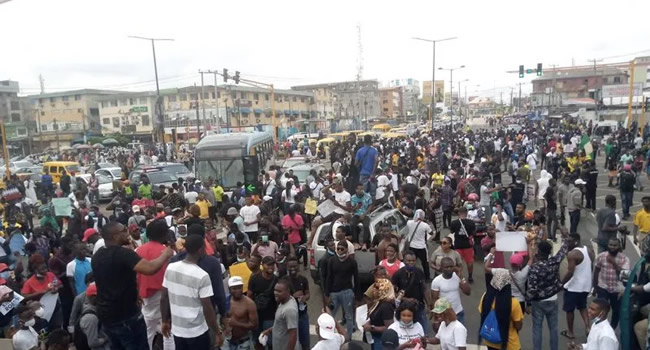 There was drama in Osogbo, the Osun State capital on Saturday, June 12, when some participants of the scheduled Democracy Day protest disagreed over the choice of venue.

While a group of protesters insisted that it would participate in a lecture organised by the state government, in collaboration with the Civil Societies Coalition, another group opposed the decision, saying it was a plan to stop the ongoing protest.

The protest was said to have started on a peaceful note as the participants moved from Oke Fia, Osogbo to Olaiya Area, chanting anti-oppression songs.

However, division set in when some participants declined to attend the event organised by the state government.

While some of the protesters chose to remain around the Oke Fia roundabout, others moved to the Lameco Area in continuation of the protest.

Meanwhile, the protest started in Oke Fia Area of Osogbo under the watchful eyes of men of the Amotekun Corps and police operatives, as leaders of the groups took turns to address the participants.

One of the conveners, Comrade Waheed Saka, lamented the hardship ravaging the country under the current administration and demanded the resignation of President Muhammadu Buhari.