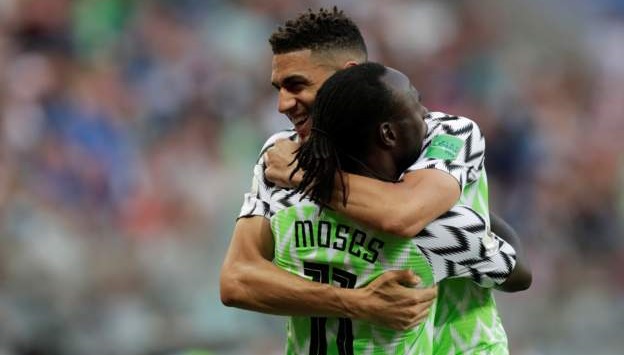 Following Nigeria’s victory over Iceland on Friday, two-time CAF African Footballer of the Year and Ivory Coast superstar, Didier Drogba is hoping the Super Eagles will make it through the Group D of the 2018 FIFA World Cup.

The former Chelsea forward, who was a guest analyst on BBC One during the game, made his opinion known after the Eagles sealed a 2-0 victory in the Group D clash in Volgograd.

A brace by Leicester City forward Ahmed Musa earned the Eagles the deserved win over an Icelandic side that missed a penalty awarded by the Video Assistant Referee (VAR).

With Iceland and Argentina having one point each, Nigeria, now with three points sit comfortably on second spot of the group table behind 6-pointers Croatia. All sides have one game left.

When asked who’s joining Croatia in the last 16 from the group, Drogba said, “I hope Nigeria progress” while his co-analyst, Danny Murphy of England, rooted for Argentina.

It was a poor first half for Nigeria as they failed to have a single shot on target throughout the first 45 minutes. But Drogba, in his half time analysis, stated thus:

“Nigeria have to be more creative, quicker – they need movement, overlaps, balls in behind the defence to create more space. They need to be more alive.

“They didn’t concede but at the end of the first half I could see Iceland were pushing a bit more and I think defending like this with so many players back is creating a kind of chaos.

“The problem for me is the strikers are playing with their backs to goal so it’s difficult to get time to turn for a shot. They need quality in the last pass – that is what makes the difference.”

But in all, Gernot Rohr’s men came back from the break and grabbed all three points with a 48th and 75th-minute goals, to earn their first win of the tournament.

The Eagles face Argentina on matchday 3 on Tuesday by 7:00p.m.

‘Nothing is impossible!’ – Buhari tips Eagles to qualify from group