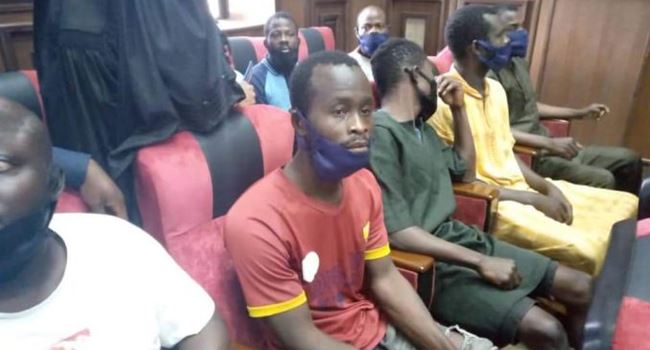 The Department of State Services (DSS) on Monday presented eigth aides of the Yoruba Nation agitator, Sunday Igboho, at the Federal High Court in Abuja.

This comes after Justice Obiora Egwuatu in his ruling on the ex parte application before the court, ordered that the DSS produce the 12 detained aides of Igboho in court on the next adjourned date, July 29.

Justice Egwuatu also ordered the DSS to show cause why the applicants should not be admitted to bail.

However, despite Justice Egwuatu’s directive, the DSS failed to produce the 12 detained aides of Igboho in court on July 29.

The court again, issued a fresh order to the Director-General of the Service to produce the 12 aides before it on August 2 (today), after the case was adjourned.

The aides were arrested when DSS officials raided Igboho’s home on July 1, but have sued the service, saying their fundamental human rights were being infringed.

The counsel to the arrested aides, Pelumi Olajenbesi, sued the DSS, claiming that his clients have remained underground for weeks after their arrest.

Cracks in IPOB, as Kanu’s private secretary accuses leaders of fighting over money

Afenifere is a terrorist group, must be proscribed —Northern Coalition