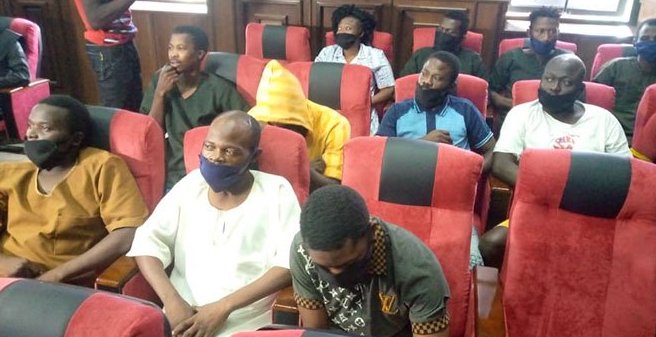 The agency arrested 12 persons during its July 1 raid on the activist’s residence in Ibadan, Oyo State.

They were later arraigned at Federal High Court, Abuja.

The DSS alleged that the detained persons colluded with Igboho to stockpile arms and other dangerous weapons in a bid to wreak havoc on some communities in the South-West.

Justice Obiorah Egwuaru, however, granted the defendants bail on August 4.

The activists’ lawyer, Pelumi Olajengbesi, who confirmed the development to journalists at a media briefing in Abuja, said they were released on Monday.

However, four others – Tajudeen Irinloye, Uthman Adelabu, Amudat Babatunde, and Jamiu Oyetunji – are still in detention.

The lawyer demanded the immediate release of the remaining four activists.

He also asked the DSS to account for two associates of the Yoruba Nation agitator killed during the raid.

Related Topics:#featuredDSSIgbohoIgboho's aides
Up Next