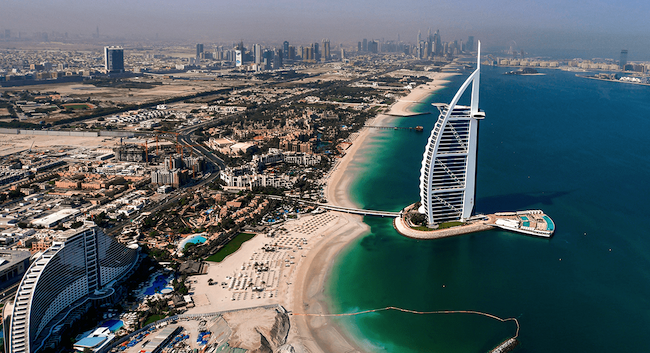 Dubai, the most populous city in the United Arab Emirates (UAE), is making its own rain to beat the 122 Fahrenheit heat caused by climate change.

The enhanced rain is created using drone technology that unleashes electrical charges into clouds in order for them to clump together and form precipitation.

The monsoon-like downpour drenches a busy highway, causing tricky driving conditions for the stream of SUVs while sudden waterfalls appear on the side of the road.

It would be a common sight in parts of South-East Asia, but this is the UAE in the height of a summer heatwave that has seen temperatures regularly surpass 120F.

According to the UAE’s National Center of Meteorology, the precipitation was enhanced by cloud seeding operations to increase rainfall in the Gulf country.

Its cloud seeding operations are part of an ongoing mission to generate precipitation in the Middle East country, which has an average rainfall of just four inches.

READ ALSO: Dubai decrees itself as the AI capital of the future

In an effort to curb the country’s sinking water table, the UAE invested $15 million in nine different rain-making projects in 2017

The current system being used to change the electrical charge of the clouds is being led by researchers at the University of Reading in England.

Prof. Maarten Ambaum, who worked on the project, told the BBC in March that the UAE has enough clouds to create conditions conducive to rain.

The project tries to get the water drops to merge and stick when they receive an electrical pulse “like dry hair to a comb.”

“When the drops merge and are big enough, they will fall as rain,” Prof. Ambaum said.

Applying electrical shocks to clouds are preferred as it does not require the use of chemicals.

Related Topics:artificial rainDubai
Up Next

Raya CX launches new accelerator in Egypt. 2 other things and a trivia