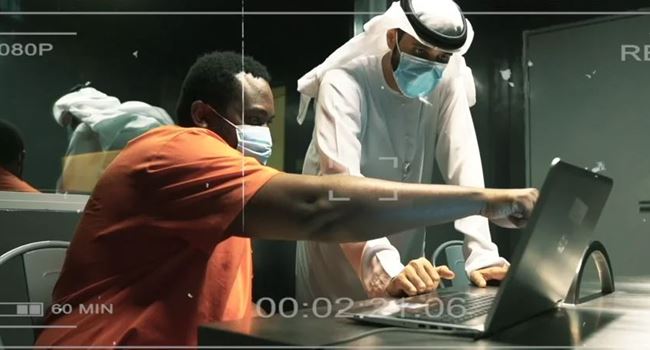 This is the first video entitled “Dubai Police operation Fox Hunt 2” from Gulf News TV of Hushpuppi and Mr Woodbery since their arrest after been monitored by Dubai E-police team.

They are being accused by Dubai authorities for 1.6 billion Dirhams scams with items worth over 150 million seized from them, including 21 computer, 47 mobile phones, 15 flash drive, hard disk with 119,580 files.

Hushpuppi who claims to be a business man is known to display a flagrant and extravagant lifestyle on social media.

“Dubai Police have once again solved yet another case involving a international online scammer known as Ramon Abbas who goes by Hushpuppi on social media platforms”, the video said.

“… Six raids were carried out simultaneously while the suspects were sleeping in their Dubai residences.

“After months of investigating and hours of monitoring the gang’ social media accounts, a team of highly trained Dubai police officers were able to confirm the gang’s whereabouts and fraudulent activities

“The Nigerian Instagram celebrity who was arrested on multiple fraud charges for crime committed in different parts of the world boasted about his wealth.

According to the video, Hushpuppi and twelve other gang members were arrested for crimes involving money-laundering, cyber fraud, hacking, criminal impersonation, banking fraud and identity theft “in order to redirect financial tranfers and people’s bank details to themselves.”

The victims are about two million in number.