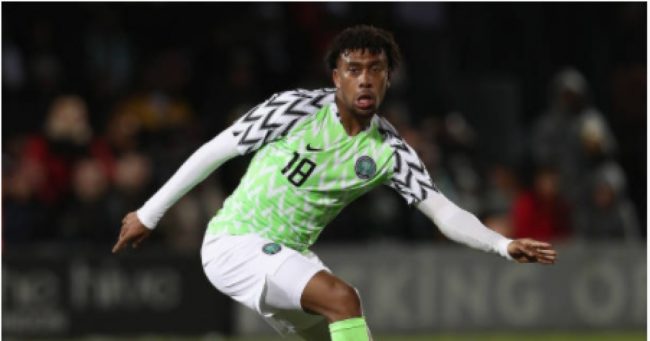 Super Eagles forward, Alex Iwobi believes that Nigeria can defeat Argentina at the 2018 World Cup, just like they did last November when the Eagles edged past the south Americans 4-2 in a friendly.

Two-time World Cup winners Argentina have now been drawn five times against Nigeria in the group stages of the World Cup, and have won on all four previous occasions.

They were however given a good fight by the Super Eagles when both teams went head to head in an international friendly in Krasnodar last year as the Nigerian side came out on top.

Iwobi, who scored two of Nigeria’s four goals in the encounter, believes the feat can be repeated when the rivals meet again in World Cup Group D matchday 3 in Russia.

“We are confident we can repeat that (the friendly win) at the World Cup. We were unbeaten in the qualifiers and we are confident and have young talents, who want to prove themselves any time they are on the pitch,” the Arsenal star said on Friday in Uyo.

“No doubt, we are in a very tough group but we are going to work hard to qualify from the group. We have a great team, so we have no reason to fear because we’ve got what it takes to make it.

“We are not setting targets but we are confident we can come out of the group. With our fans behind us, we can go far at the tournament.”

22-year-old Iwobi, currently camping with the Eagles ahead of Monday’s international friendly with DR Congo, expressed excitement over his going to the World Cup for the first time, adding that he has set no personal targets going into the competition.

“I don’t have personal targets as well, it’s my first World Cup and I can’t wait to play at the World Cup,” he stated.

After the DR Congo game, Gernot Rohr’s men are billed to face England in London on June 2 followed by a clash with Czech Republic four days after, before finally jetting out to Russia.

They begin their World Cup campaign against Croatia on June 16, then face Iceland on matchday 2 and Argentina in the final group game.