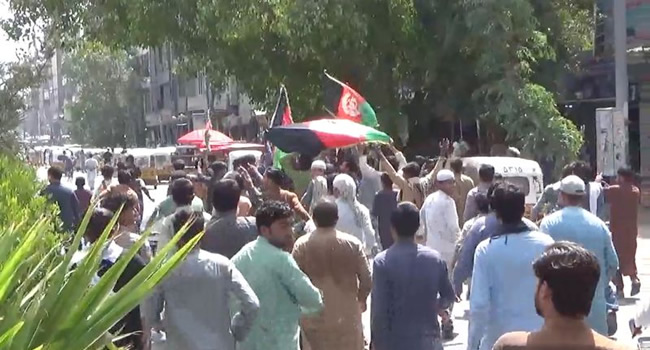 Flag-waving protesters took to the streets of more Afghan cities on Thursday as popular opposition to the Taliban spread, and a witness said several people were killed when the militants fired on a crowd in Asadabad in the east.

In a video clip posted on social media, a crowd of men and women waving black, red, and green national flags shouted “Our flag, our identity,” in the capital Kabul.

A witness reported gunshots fired near the rally, but they appeared to be armed Taliban shooting in the air.

One woman walked wearing an Afghan flag around her shoulders, and those marching chanted “God is greatest”. At some protests elsewhere, media have reported people tearing down the white flag of the Taliban.

Some of the demonstrations are small, but combined with the ongoing scramble by thousands of people to get to Kabul airport and flee the country, they underline the challenge the Taliban face to govern the country.

The Islamist militant movement conquered Afghanistan at lightning speed as foreign troops withdrew, surprising even its leaders and leaving them to fill a power vacuum in many places.

READ ALSO: Facebook to block Taliban’s WhatsApp accounts. 1 other thing and a trivia

Since seizing Kabul on Sunday, the Taliban have presented a more moderate face to the world, saying they want peace and will not take revenge against old enemies and will respect the rights of women within the framework of Islamic law.

During their previous rule from 1996-2001, they severely restricted women’s rights, staged public executions, and blew up ancient Buddhist statues.

In Asadabad, capital of the eastern province of Kunar, several people were killed during a rally, but it was not clear if the casualties resulted from Taliban firing or from a stampede that it triggered, witness Mohammed Salim said.

“Hundreds of people came out on the streets,” Salim said. “At first I was scared and didn’t want to go but when I saw one of my neighbours joined in, I took out the flag I have at home.

“Several people were killed and injured in the stampede and firing by the Taliban.”

Protests also flared up in the city of Jalalabad and a district of Paktia province, both also in the east.