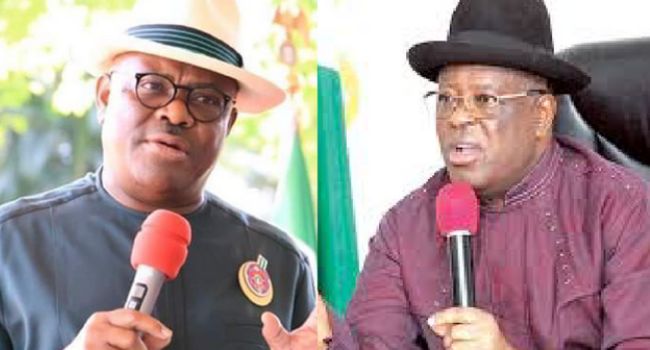 The All Progressives Congress (APC) in Ebonyi State on Sunday, lampooned Rivers State Governor, Nyesom Wike, following his comments on embattled state Governor Dave Umahi, saying the comments by Wike were not only contemptuous but “an affront to the judicial system in the country.”

Wike had, during a programme in Port Harcourt, on Saturday, called on Umahi to “return the mandate he (Umahi), stole from the Peoples Democratic Party” following an order from the Federal High Court in Abuja sacking him and his deputy for defecting to the APC.

During the programme, Wike had also vowed that the PDP would pursue the case of Umahi’s defection to the APC up to the Supreme Court if the Ebonyi governor failed to handover to the PDP.

But in a statement on Sunday by the Ebonyi State APC Chairman, Chief Stanley Okoro-Emegha, the party described Wike’s “outburst” on Umahi as a “pointer to the fact that the Nigerian judiciary was being manipulated by powerful forces and an affront on the judicial system.”

“The attention of the Ebonyi State chapter of the APC has been drawn to the reckless outburst of the Governor of Rivers State, Nyesom Wike,” the statement reads.

“The governor was reacting to the very unjust and widely condemnable Federal High Court ruling, which recently sacked Governor Umahi and his deputy, Dr Kelechi Igwe.

“After listening to Wike’s reckless tirades against Governor Umahi, which is very characteristic of him, the Ebonyi State APC feels obligated to reply to the garrulous, highly pompous but poorly performing Rivers State governor, and to place him where he rightly belongs.

“This is more so given that he has achieved nothing other than violence, turbulence and destruction of people’s hard-earned property ever since he became the governor.

“Nigerians are very much aware that there is no comparison between the widely-rated performing David Umahi and the power-drunk Nyesom Wike in any area, as Governor Umahi clearly surpasses the sleeping governor of Rivers State in all indexes of performance, both in private life and public service.

“It is a measure of the rot in our democracy that a Governor of a state will have no qualms in publicly reprimanding and threatening to deal with a fellow Governor over an issue that is before a court of competent jurisdiction.

“It speaks to the malaise in the Nigerian judiciary and further lends credible credence to the insinuations that our judicial system is indeed being manipulated by some powerful forces against ordinary Nigerians.

“Governor David Umahi has since appealed the judgement of the Federal High Court, Abuja, while hoping that the appellate courts will upturn the ruling of the lower court, because it does not align with any of the already established legal precedents on the issue of defection in the country.

“Having said that, Nigerians are however, invited to note that the current travails of Governor David Umahi have nothing whatsoever to do with offending any law, but a clear case of political enemies persecuting a performing Governor because of his rising political profile as indicated by the utterances of Governor Wike.

“Wike should know that it is God that lifts and not mortals like him. So, no amount of his evil plots will be potent enough as to be able to dislodge nor remove a serving Governor, who was single-handedly installed by God Himself for a unique purpose for His people.

“Wike and his co-travellers should go to hell and burn to ashes if they cannot accept the verdict of God, which has positioned Governor Umahi as the most qualified and preferred aspirant to succeed President Muhammadu Buhari in 2023 and stop behaving like sadists who are hell-bent on equalising misery.

“The All Progressives Congress (APC) in Ebonyi State, the good people of Ebonyi State and indeed all lovers of democracy will continue to support and pray for Governor Umahi, not only for the restoration of his mandate, but also for his victory as the president of Nigeria in 2023, because the wickedness of men can never overshadow the grace and mercy of God almighty.

“if not that Governor Umahi has warned us against attacking any leader or Governor on his behalf, I would have properly situated the despicable character in Rivers State Government House, who now masquerades as a Governor.

“However, Governor Wike is once again advised to focus his attention on solving the numerous developmental challenges buffetting his Rivers State, and stop dissipating energy sounding like the godfather of the Nigeria body-polity.”