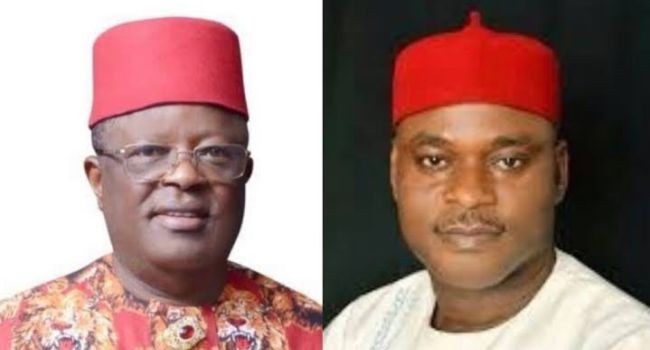 An Ebonyi State High Court has given the embattled state Governor, David Umahi, and his deputy, Kelechi Igwe, a lifeline by ordering them not to vacate office on the orders of a Federal High Court in Abuja.

The Federal High Court had, on Tuesday, sacked Umahi, Igwe, Speaker of the State House of Assembly, Francis Nwifuru, and 16 lawmakers over their defection from the Peoples Democratic Party (PDP), to the ruling All Progressives Congress (APC).

The presiding judge, Justice Inyang Ekwo, while delivering his ruling, had declared the defection of Umahi and the others as “unlawful, unconstitutional, null and void,” and ordered them to immediately vacate their offices.

But in a new twist to the sacking saga, Umahi and Igwe headed to the Ebonyi High Court on Thursday and got an order mandating them not to vacate their offices in the interim.

The judgement came following an ex-parte motion filed by counsel to the Governor and his Deputy, Roy Umahi, which was brought in pursuant to rule 3(3) of the High Court rules of Ebonyi State in suit no HAB/13/22.

The Ebonyi Court had, on February 28, ruled that Gov. Umahi and his Deputy did not flout any law by defecting to the APC from the PDP, the party which brought them to power.

The case which was dragged to the court by Sunny Ogbuoji, who was the APC candidate and runner up in the 2019 governorship election, was dismissed by the presiding judge, Justice Henry Njoku, for lack of merit.

But on March 8, the Abuja High Court gave a different ruling on the matter which was filed by the PDP seeking the removal of Umahi and Igwe for defecting from the PDP to the APC, ordering that the duo must vacate their offices with immediate effect.

Not satisfied with the verdict, Umahi and Igwe, again, approached the Ebonyi High Court on Thursday, and begged the court to declare that its earlier judgement remains valid and that they should not be removed from office.

They also argued that the court should mandate that the earlier “judgement should take precedence over any other contrary judgement and should be binding on all parties, persons and authorities.”

While granting the prayers of the applicants, Justice Njoku gave a ruling keeping them in office while adjourning the matter to March 16 for hearing on the motion on notice.

“It is hereby ordered as follows: an interim order of of this honourable court for seven days (subject to renewal) is hereby granted in view of the judgement in suit no. HAB/13/22 delivered on the 28th day of February, 2022, being a judgement in rem and having precedence over any contrary judgement.

“The applicants hereto Engr David Nweze Umahi and Dr Eric Kelechi Igwe, shall accordingly remain and not be removed from office as governor and deputy governor of Ebonyi state respectively,” Justice Njoku said while delivering judgement.