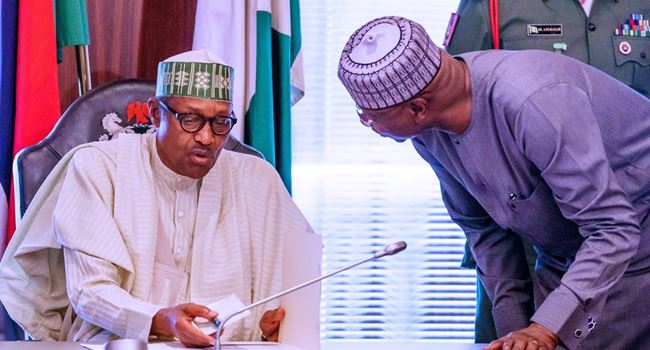 The Presidential Economic Advisory Council (PEAC) on Tuesday at its meeting with President Muhammadu Buhari recommended reduction in budget size and widening of the nation’s revenue base to ward off a greater economic downturn.

At the State House meeting with the president, the Prof Doyin Salami-led team noted the crippling impact of the coronavirus and the fall in the price of oil on economic growth particularly the current financial slowdown, saying it was capable of weakening investors’ confidence.

It admitted that the country stood the chance of slipping into recession once again if government failed to devise viable reforms as a buffer against hard times.

The team highlighted job loss, glut in the international oil market, negative balance of trade and dwindling foreign reserves as the notable consequences of the current economic crisis.

A statement credited to Femi Adesina, Special Adviser on Media and Publicity to the president, buttressed the PEAC’s position that Nigeria needed swift efforts to ward off economic austerity as other countries of the world battle a potential recession.

“Recommending, among others, a possible revision of the 2020 budget, with priority spending on healthcare, re-prioritisation of expenditure on infrastructure to focus on projects nearing completion with pro-poor effects, curtailing recurrent expenditure, mobilising the private sector to strengthen health sector infrastructure, and boosting of government revenue, the PEAC stressed that the projections may seem dire, but the worst may be avoided with hard work and scrupulous implementation of policies,” he acknowledged.

At the meeting, Buhari confirmed that government was working out policies that would bail Nigeria out of the predicament posed by falling oil prices.

“We will see how to survive fallen prices, as we already envisaged the problem,” Mr Buhari stated.

Dollar exchanges for N369 as oil dips to $28 per barrel

French Open tennis moved to September because of coronavirus