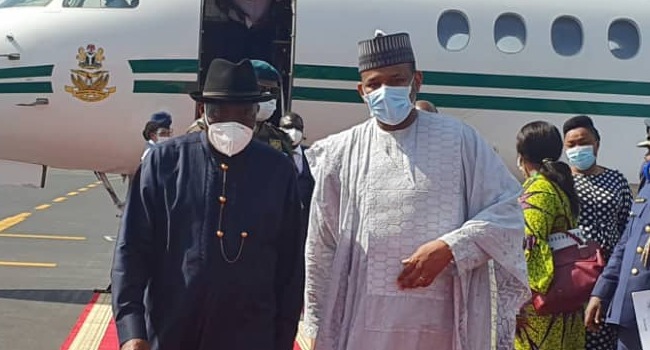 Former President Goodluck Jonathan has returned to Mali to continue his assignment for the Economic Community of West African States (ECOWAS).

The former Nigerian President was recently appointed by the ECOWAS as a special envoy to lead its mediation mission in Mali.

Jonathan had met President Muhammadu Buhari at the Presidential Villa on Tuesday to brief him of his activities as ECOWAS Special Envoy to restore calm to Mali, rocked by protests against President Ibrahim Boubacar Keita, who has spent two out of the five-year second term in office.

The former president announced his return to Mali in a tweet on his verified Twitter handle, @GEJonathan, on Thursday.

READ ALSO: Jonathan briefs Buhari on ECOWAS assignment, thanks him for naming railway complex after him

He wrote, “I arrived Bamako this morning, the second time I will be visiting Mali with my @ecowas_cedeao team on a mediation mission in a week.

“Today, we’re being joined by five West African Heads of State who are visiting Mali to hold further consultations with Malian stakeholders.”

President Buhari, believed to be one of the five West African leaders joining Jonathan’s team, left Nigeria this morning and is already in Mali.