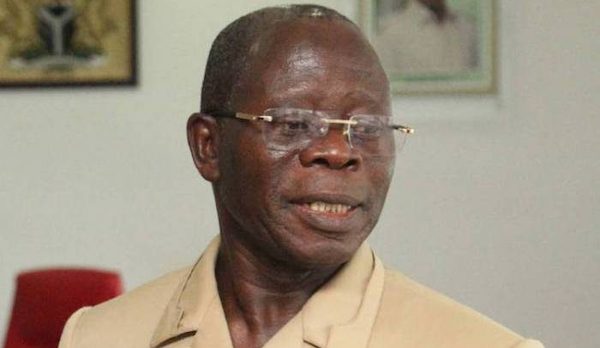 Despite the ban on all political rallies, processions and demonstrations by the state government, Ize-Iyamu was welcomed by a large crowd of supporters in the state.

Ize-Iyamu who defected to the APC officially in November was received by the former deputy governor of Edo State, Dr. Pius Odubu, who represented Comrade Oshiomhole, at his residence in the state capital.

In the build-up to the rally, suspected thugs lit bonfires on the road leading to Ize-Iyamu’s residence in Ugbor, GRA, Benin City where the defection took place.

Speaking on the event, Oshiomhole said the rally was peaceful and that Ize-Iyamu’s arrival had helped the party gain more supporters and strength in the forthcoming governorship elections.

“In spite of everything, APC had a successful rally that was peaceful and it achieved its purpose.

“As I stand here now, I am taller now than I was just yesterday because we have harvested to our party, people who were part of the foundation of the APC. Those who participated in the negotiation for the merger, not only have they returned home, they have also used their connection in the other party they were in, to move people who have always been on that side to come and join us.”

Oshiomhole added, “I hear some people are panicking that pastor is coming because he wants to take a ticket. I have become sick of this suspicion; my former deputy governor was appointed as the Director of Buhari campaign organisation and the governor alleged that the appointment means I am preparing him to take over from him. He is now appointed as chairman of NDDC and they claim it is all part of the plot.”

The Inspector-General of Police had suspended the rally yesterday owing to security concerns while the Edo State Government also issued a ban on all political activities in the state till further notice.

Obaseki not ready for settlement of crisis — Oshiomhole