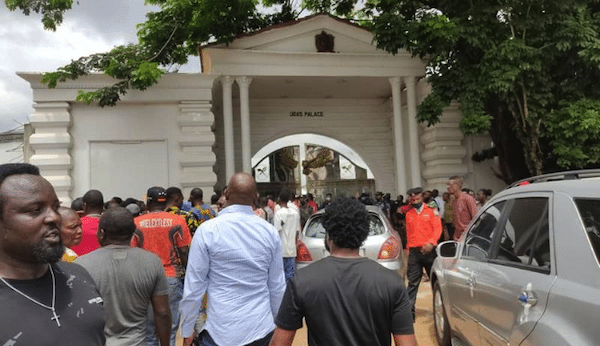 The All Progressives Congress (APC) and the Peoples Democratic Party (PDP) in Edo on Sunday traded blames over Saturday’s clash between their supporters.

Supporters of both parties clashed near the Oba of Benin’s palace on Saturday.

An unspecified number of people from the two parties sustained injuries in the clash.

In his reaction to the incident, the Chairman, South-South Caretaker Committee of the PDP, Chief Dan Orbih, condemned the violence and alleged that it was masterminded by the APC.

He said: “I condemn the unfortunate incident that took place yesterday (Saturday) in the course of the official visit of governors and members of the PDP National Campaign Council to the Palace of our Royal Majesty, Oba Ewuare II, Ogidigan.

“I want to place it on record that the visit was officially communicated to the palace and the various security agencies.

“In the entourage were PDP leaders, the party’s national chairman, members of the national working committee, Governors of Rivers, Sokoto, Delta, and of course the host Governor, Godwin Obaseki.

“I want to also place it on record that there was no official APC event in the palace or anywhere in Benin, that was so communicated in accordance with the Independent National Electoral Commission (INEC) guidelines.”

The National Vice Chairman, Media/Communication Committee, Ize-Iyamu Campaign Council, Patrick Obahiagbon, at a news conference in Benin, accused the Edo State government and the PDP of being responsible for the violence.

“On Saturday, July 25, the governor’s army of thugs descended on protesters at the entrance of the palace of our great king.

“This sent many to the hospital with gunshot wounds, because they dared to express their rejection.

“Our plea to INEC, the police, and other relevant stakeholders is to request the governor to allow the rule of law and a level democratic playing field to hold supreme,” he said.

Why I quit PDP —Dogara