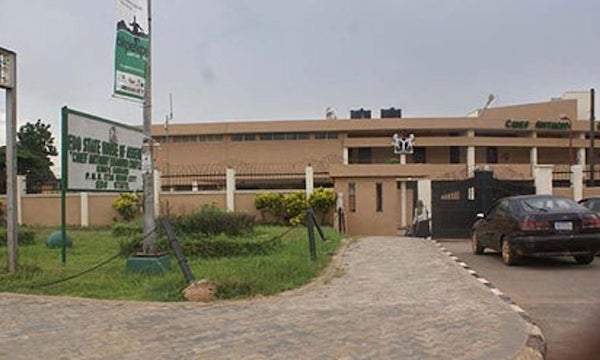 The Edo State chapter of the All Progressives Congress (APC) has reacted to the takeover of the state assembly complex by the police.

The party in the state said it had nothing to do with the police action, and that the state governor, Godwin Obaseki was in the best position to explain activities at the legislative chamber.

Edo APC which denied having any hand in the police siege on the Assembly complex, also absolved the former national chairman of the party, Adams Oshiomhole, from playing any role in the police action.

Dozens of policemen on Thursday morning took over the state assembly complex.

In its response, the ruling party in the state, the Peoples Democratic Party (PDP) accused the APC and Oshiomhole of being behind the “illegal takeover” of the complex and called on the Inspector General of Police (IGP) to immediately end the siege.

But in its reply to the allegation by the PDP, the opposition party said in a statement by the chairman of the APC Media Campaign Council in Edo, John Mayaki, that it had no control over the police.

According to the APC, the Governor Obaseki-led PDP government should be held responsible for a number of sieges on the Assembly complex.

He added that Obaseki was in the best position to tell who sponsored the blockade of the assembly.

He said, “It is a known fact that the outgoing governor, Mr Godwin Obaseki, has treated the House of Assembly, an independent and co-equal branch of government, as a mere extension of his office through the brutalisation of members-elect and the denial of representation to the majority of members.

“In Gestapo style, the outgoing governor hijacked a tiny minority and purportedly inaugurated them in the dead of the night.

“The sham inauguration was condemned and set aside by both arms of the National Assembly after their separate investigations revealed that the members, and indeed the Clerk, were forced to participate in the illegality under threat to life.”

On Oshiomhole having a part to play in the blockade, Mayaki said, “If indeed he (Oshiomhole) has any control over the police, wouldn’t he have instructed them to leave and grant him entry (into the APC national secretariat)?”