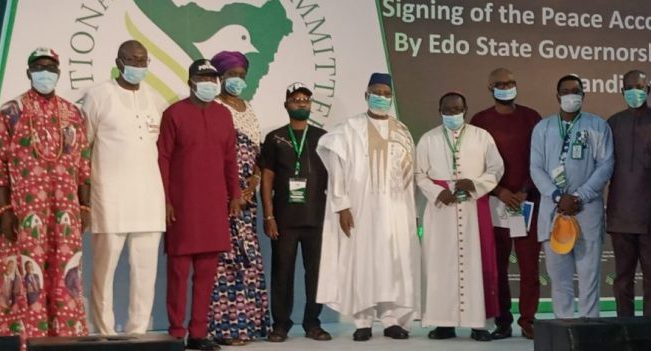 Ahead of Saturday’s governorship election in Edo State, candidates of political parties in the state have entered into a peace agreement to ensure a violence-free election.

Among the candidates were those of the two major political parties, incumbent Governor Godwin Obaseki and candidate of the Peoples Democratic Party (PDP) and the All Progressives Congress (APC) candidate, Osagie Ize-Iyamu.

The governorship candidates pledged their commitment to a violence-free election in the state and also promised to accept the outcome of the exercise.

They made the pledge at the signing of the peace deal held at Oba Akenzua Cultural Centre, Benin City, the state capital.

The peace accord was organised by the National Peace Committee (NPC) led by a former Head of State, General Abdulsalami Abubakar (rtd) and the Bishop of the Sokoto Diocese of the Catholic Church, Bishop Mathew Kukah.

The peace agreement came amid

security concerns ahead of the election. There have been fears there may be clashes between rival supporters before, during or after the exercise on Saturday as witnessed during campaigns.

In attendance to witness the peace accord included the chairman of the Independent National Electoral Commission (INEC), Professor Mahmood Yakubu, representative of the Inspector-General of Police (IGP), DIG Adeleye Oyebade, representatives of the Benin Monarch and leaders of the different political parties.