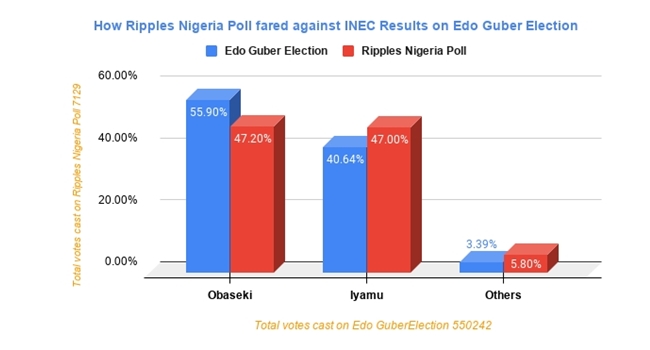 The governorship election held on Saturday in Edo State has again proven the credibility and integrity of Ripples Nigeria Poll, as a tool to gauge public sentiments.

Published on Sunday September 13, the online poll attracted 1,048, 872 views, and with 7,129 votes cast returned Governor Godwin Obaseki as winner, though with a marginal difference.

However, the election proper witnessed a total of 550,242 votes cast. The results, as announced by the Independent National Electoral Commission (INEC), returned Obaseki who polled a total of 307,955 votes the winner. He defeated his closest rival, Pastor Ize-Iyamu, who polled a total of 223,619 votes with over 84,000 votes. The performance meant that Obaseki scored 55.97 percent of votes cast while Ize-Iyamu bagged 40.64 percent. The remaining 15 candidates who participated in the election got 18, 668 votes, representing 3.39 percent.

With 8.77 as margin of error, the Ripples Nigeria poll was close to the mark. However, it was in the area of social media engagement that the poll scored a bull’s eye. It had noted though that conversations within the social media space were unreliable scientific measurements.

The report had noted, “Governor Obaseki had a fair share of the engagements in his favour but this is very unreliable in measuring possible votes for his party, as majority of Nigerians have proved overtime to be mere commentators who fail to vote on Election Day.”

However, a few qualitative outcomes look to have to have reshaped certain permutations and influenced many undecided voters. Among these were the much maligned broadcast by Asiwaju Ahmed Bola Tinubu of the ruling All Progressives Congress (APC) and sanctions placed by the US and EU on some erring politicians, with warnings that perpetrators of electoral fraud in Edo would be meted similar treatments.