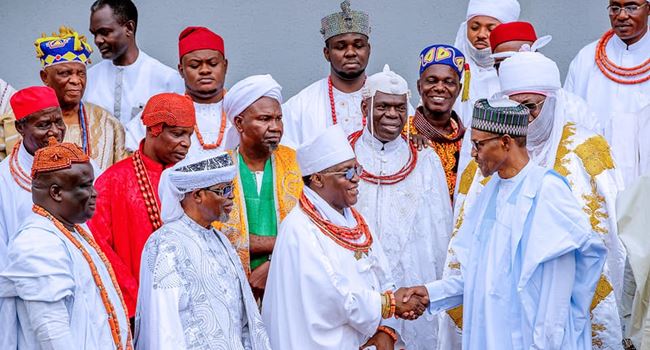 Edo monarchs under the aegis of the Edo State Council of Traditional Rulers and Chiefs, have urged President Muhammadu Buhari to wade into the feud between Adams Oshiomhole, and Governor Godwin Obaseki.

Led by Oba of Benin, Ewuare II, the traditional rulers who met with President Muhammadu Buhari at the State House, Abuja, on Wednesday also requested two ministerial slots from the president in his next cabinet.

While making their request, the monarchs said: “Mr President, we as traditional rulers in Edo State are concerned about the crisis between Comrade Adams Oshiomhole, the All Progressives Congress National Chairman and his Excellency, Governor Godwin Obaseki of Edo State, and Edo State House of Assembly.

“If this crisis is not resolved now with immediate effect, it may jeopardize the progress of the state. “On behalf of the good people of Edo State, we kindly appeal to Mr. President to use your good offices to intervene and stop this crisis,” the monarchs said. They said they decided to intervene on the matter in the interest of the state.

“Personally, even though I do not like to interfere in inter-party or intra-party matters, and always maintain that the Benin Crown is non-partisan, it is, however, difficult to turn a blind eye because if this crisis is not brought under control, it is likely to jeopardize the welfare of the masses,” the oba said.