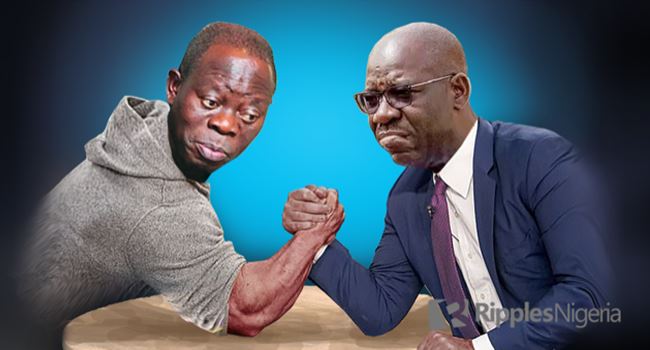 The Edo State Government on Friday placed a total and complete ban on political rallies, demonstrations or processions in the state.

The government also instructed security agencies in the state to ensure the ban is effective, by dealing firmly with any person who flaunted the law, no matter how highly placed he may be.

The directive came on the heels of the insistence of the Adams Oshiomhole faction of the All Progressives Congress (APC) in the state to hold a rally for a former governorship candidate of the Peoples Democratic Party, Mr Osagie Ize-Iyamu.

The IGP had on Thursday instructed that the rally, scheduled to hold this Friday, should not hold.

Roprt from the state, however, claimed that the Oshiomhole faction of the party was insisting on holding the rally.

But the governor, in a statement signed by the Secretary to the Edo State Government, Barrister Osarodion Ogie, banned any form of political rally in the state.

The government said that the “plans by some identified mischief-makers to organise an unauthorised political rally in Bénin City was capable of leading to breakdown of public peace and also danger to the persons and property of Edo citizens.”

It, therefore, cautioned property owners that any venue which is used for activities in breach of this order would have its right of occupancy immediately revoked and forfeited to the state government.

“The events of yesterday 12th December, 2019 were a scary prelude to the absolute mayhem which these irresponsible activities would generate if left unchecked.

“In defiance of the clear and publicized instruction of the Inspector General of Police, calling off the proposed rally owing to security implications, these desperate persons are presently shopping around for alternative venues to carry out their incendiary activities.”

Ize-Iyamu had recently decamped from the PDP to the APC raising speculations that Oshiomhole and his faction of APC in the state, may be plotting to support him to become the next governor.