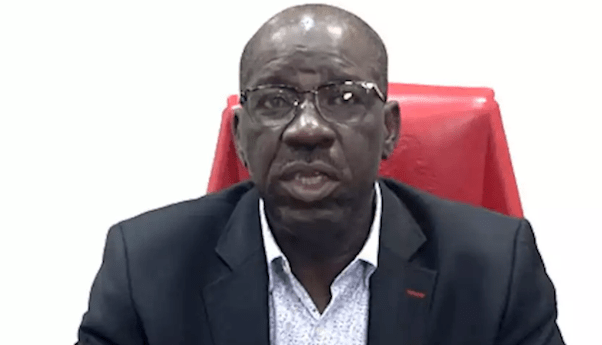 Edo State Governor, Godwin Obaseki, on Friday condemned all acts of political thuggery and violence ahead of the September 19 governorship election in the state.

The governor, who spoke with journalists after a closed-door meeting with all the security chiefs in the state, expressed concern at the rising security challenges in the state ahead of the election.

Obaseki said: “We condemned the high level of thuggery, violence and increasing inflow on arms into the state.

“The commissioner of police briefed the council on the high situation at the Edo State House of Assembly that led to some illegal and treasonable act conducted by some individuals.

READ ALSO: US embassy warns against violence ahead of Edo, Ondo elections

“The security personnel have assured us of their readiness to secure and tackle any security challenges faced by the state.

“They are up to the tasks, they have the men and materials to take charge. They assured us and the good people of Edo of adequate security in protecting lives and property.”

The governor added that the state security chiefs had assured the government on protection of all the people of the state irrespective of their political affiliations.

The state’s Commissioner of Police, Johnson Kokumo, said the police had been able to review the activities of security agencies in the last few weeks.

“We have talked about political violence and thuggery and we have evolved means of putting such to check.

“The security agencies will leave no stone unturned, we have created a conducive atmosphere for the forthcoming governorship election.

“We want to assure Edo people that the pre-election period would be conducive for campaign during and after the election to ensure no breach of law and order,” he said.

On his meeting with the 17 members of the state House of Assembly, who were inaugurated at a private residence in Benin on Thursday, the police commissioner said he was apolitical and his office was open to all.

“It is my statutory responsibility to provide security for lives and property irrespective of political affiliations,” Kokumo added.