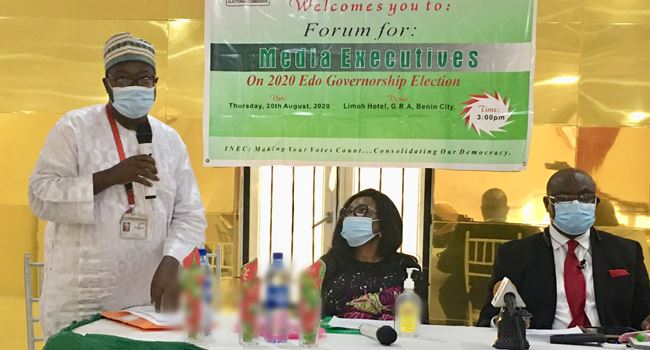 The Independent National Electoral Commission (INEC) has charged security agencies in Edo and Ondo States to arrest anyone involved in vote-buying during the forthcoming governorship polls.

This was revealed on Thursday in Benin, the Edo State capital during a workshop for journalists on election processes and procedure amid COVID-19 pandemic by the National Commissioner and Chairman, Information and Voter Education Committee, INEC Barr. Festus Okoye.

“INEC is mandated to organise elections but it cannot be conducting elections and be running after people sharing money at the polling units. Anybody buying votes may likely be arrested by security agents present at the polling booth.

“The will of the people should not be bought. We can’t allow impunity to rein in our elections, Nigeria must move forward,”

“No political party should be allowed to use violence, money, intimidation or undue influence to undermine the will of the people,” he said.

Okoye also noted that the commission is conducting the Edo and Ondo governorship elections and 15 outstanding by-elections within the context of COVID-19 pandemic that has substantially altered the previous ways of doing things.

“There is no alternative to the peaceful conduct of these elections as the alternative will leave the people of the two states with a constitutional logjam that may be difficult to resolve,” he said.

Related Topics:INECVOTE BUYING
Up Next