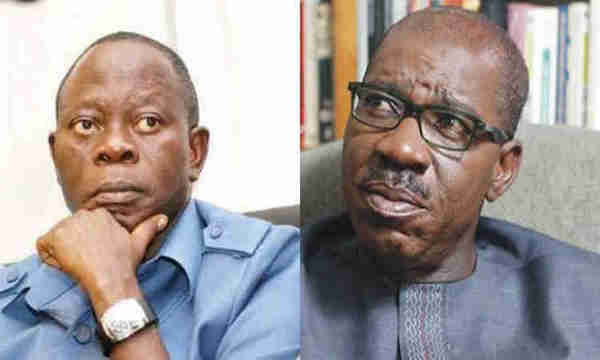 In the alleged bid to remove the loyalists of National Chairman of the All Progressives Congress, Comrade Adams Oshiomhole from government, vice chairmen of Akoko-Edo and Orhionmwon local government areas of Edo State, Mr. Philip Eguarojie and Godwin Eleduwa were respectively sacked on Monday.

The duo were believed to be among the loyalists of the former governor who is currently at loggerheads with Governor Godwin Obaseki.

Philip was impeached after he was indicted by an ad-hoc committee set up to investigate a petition of alleged misconduct.

The report was adopted during plenary by the Councilors.

Details that led to the removal of Godwin are still sketchy.

Okoro explained that the action was not to witch-hunt anyone but an administrative process to reorganize the executive arm of the council for better performance.

Garrick said his core values were not aligned with what he termed ‘dysfunctional Political System’ that Governor Obaseki had begun to entrench in the Edo APC.

He said he was joining other well-meaning party faithfuls to rescue the Edo APC from the governor’s iron grip and detour the ship of state from totalitarian rule to a society based on the rule of law.