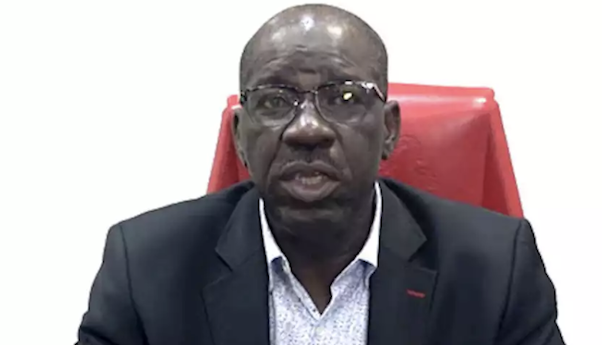 The acting state Chairman of the Peoples Democratic Party (PDP) in Edo State, Harrison Omagbon, has called for calm among stakeholders, following the suspension of the state Chairman, Tony Aziegbemi.

Aziegbemi was suspended by the party after he accused the Governor of Edo State, Godwin Obaseki, of marginalising the PDP in his political appointments so far, and also making moves to sack the party structure in the state.

In a statement issued in Benin on Thursday, Omagbon said his task as the party’s acting chairman was to broker peace and unite the PDP in Edo.

“My task as acting chairman will be to unite our party and ensure that the unity which our electoral victory bestowed on us is sustained and enlarged to the glory of God,” he said.

He noted that Aziegbemi’s suspension was to allow for proper investigation into the allegations against him.

“On behalf of the state working committee, I am deeply sorry. However, we cannot wish away our party’s sanctity, integrity, and pride on the altar of parochial sentiments. That is why we have set up a committee to investigate and unearth the facts of these allegations.

“My dear party faithful, we are at a very auspicious time in our democracy. It is on record that our governor is counted among those delivering the dividends of democracy to the people. We cannot engender a party culture of corruption and flagrant disregard for the wishes of the people.”

The suspended PDP chairman had in a letter he jointly signed with the party secretary in the state, Hillary Otsu, accused Obaseki of marginalising the PDP in his political appointments so far and also making moves to sack the party structure in the state.

The duo said the letter was written on behalf of the “expanded State Working Committee of the party”.

“Edo people voted for PDP and Godwin Obaseki to deliver the dividends of democracy to them.

“If he wishes to appoint only his friends and former APC colleagues in his cabinet and sundry positions and leave out the legacy PDP members, so be it,” read Aziegbemi’s letter to the national leadership of the PDP.

Akpabio leads delegation to beg fugitive, Tompolo, over crisis around NDDC board