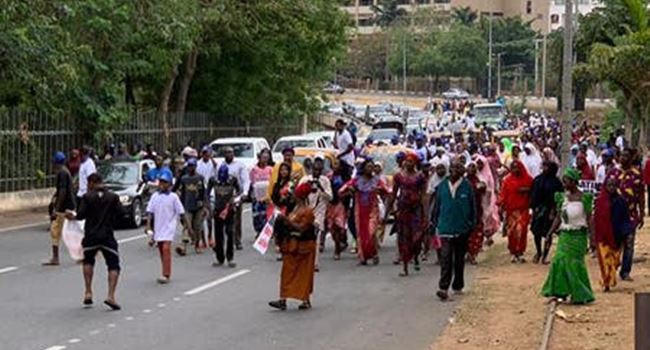 Women of Ikabigbo community in Uzairue Etsako West Local Government Area of Edo State on Tuesday, urged herdsmen occupying their community to leave, as their presence has caused them more harm than good.

The women besieged the palace of the traditional ruler, Chief Braimah Alegeh, to register their displeasure over what they called ‘wanton destruction of crops and farm land’.

According to the spokesperson for the protesting women, Mrs. Rose Ekhalumhe, the herdsmen have destroyed their farmland and crops with their cattle.

“They want to create hunger in our community. They will enter our cassava farm, uproot the cassava to feed their cattle while the cows would destroy the remaining ones.

“Yam barns are not spared in this destruction by herdsmen and their cattle. We are now afraid to go to the farm because many of us have been beaten up and injured by herdsmen for daring to ask them to stop destroying our crops and farm lands.

“So we are here to let you know that we are tired of their atrocity. We can’t farm anymore and the little ones we have cultivated have been destroyed by the herders and their cattle. We want them to leave our community. We didn’t give them any land,” she said.

The women also appealed to the state government and security agents to come to their aid to allow them attend to their farm activities and avoid hunger.

While responding, Alegeh assured the protesters that their grievances would be channeled to the appropriate authorities for action.

“I have reported the matter to the clan head, Ogieneni of Uzairue , His Royal Highness Kadiri Omogbai, that I am inundated with the destruction of crops and farm lands by herdsmen in my community, and he promised to look into it,” he said.

Nine of the original 12 vlubs involved in the formation of the European Super League (ESL) have accepted the financial...