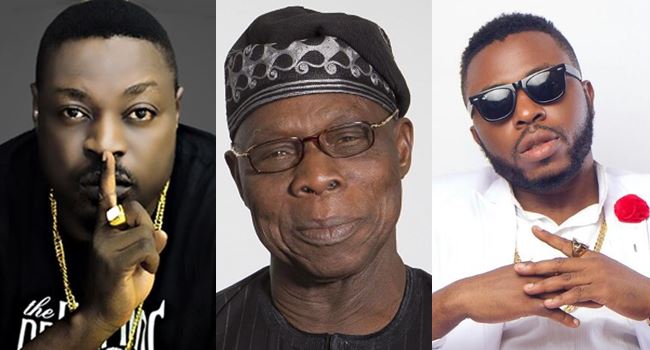 Former band member of the Remedies, Eedris Abdulkareem and music producer Samklef have both taken turns to hit former President of Nigeria, Olusegun Obasanjo below the belt with both entertainers accusing the former leader of many atrocities.

The pair who took to Instagram to spill their guts listed the many sins of Olusegun Obasanjo and both agreed that in civilized countries, the former president would be in jail for his deeds.

Samklef who accused Obasanjo of taking out “history from the Nigerian curriculum to cover up the tracks from the atrocities leading on to the Biafra war and its aftermath”, also described him as one of the greatest beneficiaries of the civil war.

Samklef wrote; “The OBJ government took history out of Nigerian curriculum to cover up their tracks from the atrocities leading on to the Biafra war and the aftermath… OBJ was one of the huge beneficiaries of the war as for leading the last advancement after to capture the southeast.

“Nigerians are so funny so bringing GSM to Nigeria Na OBj biggest achievement. I call this man somebody da ile ru somebody tuleshse! These are the men that mess up Nigeria?? System up… No be him mate turn Dubai to paradise?

“We need to ask obasonjo what he did with the money that was supposed to give Nigeria 24 hours light now that he is still alive,” he added.

‘Jaga Jaga’ crooner, Eedris Abdulkareem who once dropped a song in June, 2018, titled ‘Letter To Obasanjo’, where he called out the former President, saying he was the ‘problem of Nigeria’, in his post on Instagram described the former leader as the genesis of Nigeria’s current problems.

He went on to outline what he said were the many sins of Obasanjo’s against Nigeria and it’s people, and then “Well said my brother Samklef infact obasanjo is the genesis of our problem….,” he concluded.

LATEST TECH NEWS: WHO to launch COVID-19 symptom-checking app. 4 other things and a trivia you need to know today, May 11, 2020