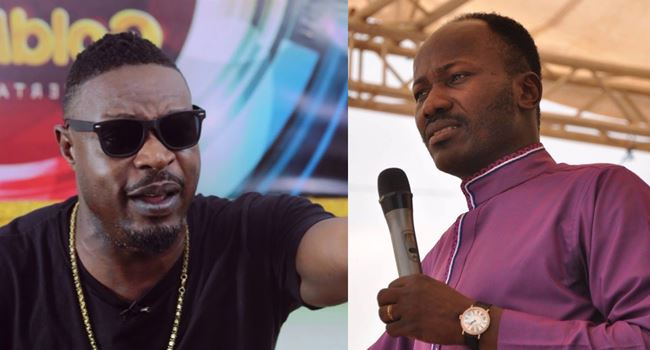 Recall that Abdulkareem alongside other veteran artists yesterday embarked on a peaceful protest to the redemption camp where they demanded pastor Adeboye to speak out on insecurity issues in the country.

But the action was countered by Apostle Suleman who said he had asked Nigerians to pray about the situation.

However, Eedris Abdulkareem queried why Suleman did not pray for Stephanie Otobo who accused him of sleeping with her, rather he reported the case to the police.

According to him, a man of God must not only pray but speak out against injustice.

He wrote: “Dear Apostle Suleiman, are you aware that Leah Sharibu has been under captivity for five hundred and one day? 501 day…yes.

“Let me ask you why you did not pray to God when Stephanie Otobo accused you. Instead, you went to the police. Why did you speak up against her and now ask us to be silent while our people are killed daily?

“I remember Pa Adeboye praying for Buhari. Why did he not also refuse to pray for him then? What is this hypocrisy that we like to dey embrace for Nigeria?

“All I am saying is this: Keep praying but also speak up? It costs all of you nothing. The Bible says Faith without works is dead. I am not a pastor yes I know this.

“Na me Eedris Abdulkareem talk am! Peace and Love always.”

Okorocha demands apology from Ihedioha, others over N50bn theft allegations