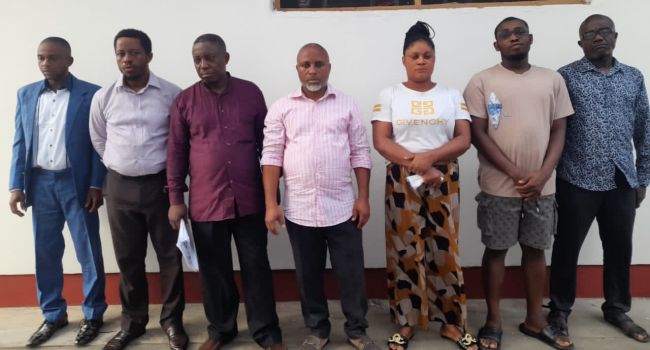 The Uyo Zonal Command of the Economic and Financial Crimes Commission (EFCC) has arraigned Barrister Samuel Ebitu alongside six others, for allegedly stealing the sum of N13,171,415.25 from the account of a deceased police officer.

They were arraigned before Justice Agatha Okeke of the Federal High Court sitting in Uyo, Akwa Ibom state, on two-count charges bordering on conspiracy, forgery and obtaining by false pretence.

Specifically, widow of a late Chief Superintendent of Police, Godwin Edet Umoren raised a petition against the defendants for allegedly diverting the said sum of money from the account of her dead husband.

One of the counts read: “That you Etimbuk Godwin Edet, Michael Jeremiah Isong, Sunny Isong, Godwin Ekanem, Emmanuel Jackson Isong, Harrison Ofuomah Emamoke, Samuel Ebitu sometime in September 2020 in Uyo within the jurisdiction of this Honourable Court with intent to defraud, did conspire among yourselves to commit a felony to wit: obtaining money by false pretence by inducing the United Bank for Africa Plc (UBA) to confer a benefit in the sum of N13,171,415.25 (Thirteen Million, One Hundred and Seventy-One Thousand, Four Hundred and Fifteen Naira, Twenty-Five kobo only) on one Sunny Isong (3rd Defendant), a sum which was withdrawn from the account of Late CSP Godwin Edet Umoren, domiciled in United Bank for Africa Plc (UBA), which pretext you knew to be false and thereby committed an offence contrary to Section 8 (a) of the Advance Fee Fraud and Other Fraud Related Offences Act 2006 and punishable under Section 1 (3) of the same Act”.

All the seven defendants pleaded “not guilty” to the charges preferred against them by the EFCC, and in view of their pleas, EFCC counsel, Adebayo Soares, prayed the court for a trial date and for the defendants to be remanded in the Nigerian Correctional Centre.

Justice Okeke thereafter adjourned the matter till May 24, 25 and 26 2022 for hearing, while the defendants were remanded at the Nigerian Correctional Centre, Uyo.

According to head of media and publicity of the EFCC, Wilson Uwujaren, investigations into the matter revealed that, Barrister Samuel Ebitu allegedly conspired with other defendants to obtain a Letter of Administration from Probate Registry, Akwa Ibom State Judiciary, which they used in diverting the sum of N13,171,415.25 (Thirteen Million, One Hundred and Seventy-One thousand, Four Hundred and Fifteen Naira, Twenty-Five kobo), through the 3rd defendant, Sunny Isong who claimed to be the only surviving brother of the deceased.

They were subsequently arrested at different locations in Akwa Ibom State and charged to court.