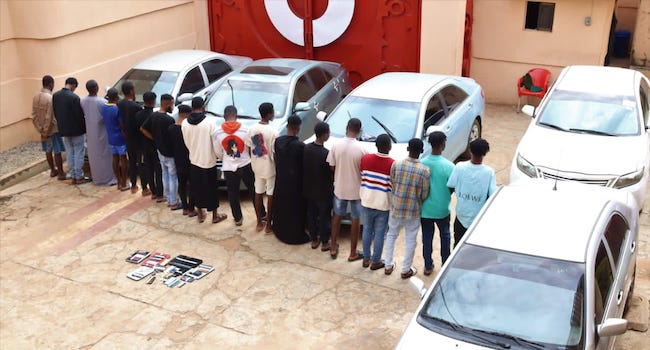 The EFCC’s Head of Media and Publicity, Wilson Uwujaren, confirmed the development in a statement on Tuesday in Ilorin, Kwara State.

Uwujaren said the arrest of the suspects was part of the commission’s efforts at curbing the rising internet related fraud in the country.

He said: “This is the second such operation in the state within the last two months.

”Recall that operatives of the Ilorin zonal command, which covers Kwara, Ekiti and Kogi States, had in June arrested 19 suspected fraudsters at different locations in Lokoja.

“The latest arrest, which was made on Wednesday, August 3, followed actionable intelligence and hours of surveillance by the anti-graft operatives to smoke out the suspected fraudsters off their hideouts.

“Preliminary investigations revealed that the suspects operated as syndicate to scam unsuspecting victims.

“The suspects have incriminating items in their possession including five different brands of exotic cars, phones, and laptops.”

Related Topics:EFCCinternet fraudsters in Kogi
Up Next