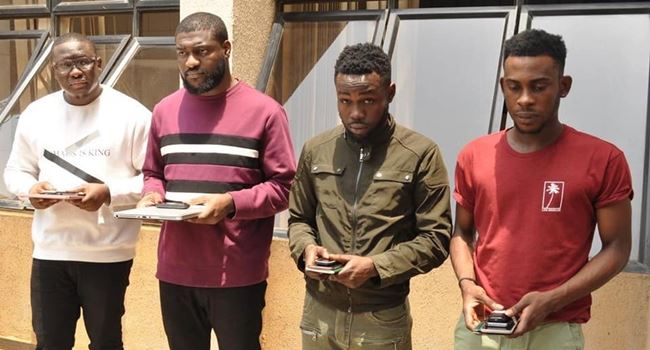 Four cybercrime suspects were arrested by operatives of the Economic and Financial Crimes Commission (EFCC), Abuja, on Tuesday.

The arrest was made after the operatives raided the residence of the suspected Internet fraudsters, better known as Yahoo-Yahoo boys and arrested four of them at Plot 1202 News Engineering Estate, Dawaki, Abuja.

Confirming the incident, a statement by EFCC spokesman, Wilson Uwujaren, explained that the raid followed intelligence gathering and covert surveillance of the affected area over some time.

The statement also revealed that several items were recovered from the suspects. They include; mobile phones, laptop computers, and a Mercedes Benz C350.

The EFCC spokesperson, however, said the suspects would be charged to court after investigations were completed on their atrocities.