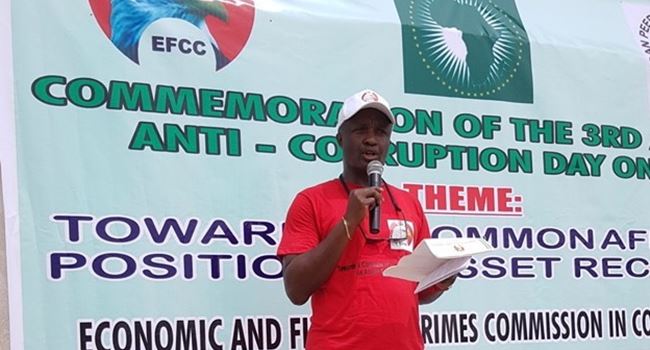 The acting Chairman of the Economic and Financial Crimes Commission (EFCC), Ibrahim Magu has opened up on why it is very hard to recover stolen assets which end up in Safe Havens.

According to the EFCC boss, the Illicit Financial Flows (IFF) from Nigeria to financial secrecy dubbed Safe Havens, which amounts to about $17 billion yearly, according to the Global Financial Integrity report, are hard to track.

Magu who revealed that much at a round-table in Abuja to commemorate the African Union (AU) Second Anti-Corruption Day, on Thursday themed: ‘Towards a Common African Position on Asset Recovery’, said these financial secrecy jurisdictions are usually in westerns countries with complex banking and financial market systems.

He stated that “We often have challenges in recovery of the assets stashed away in some of these countries,” noting that “Africa needs all her assets back!”

He said, “Unity among nations in the African continent is critical in demanding the recovery and return of stolen assets,” adding that, “we also, need accountability and transparency in the utilization of returned assets.”

Magu stated that Africa has come to the realization that one person, continent, agency or country alone cannot fight corruption and win.

“When government agencies, different bodies, continents and countries partner and synergise on collaborative ventures like this, the benefits are enormous,” he added.

Abuja natives give govt 48 hours to end Shiites’ protests, or they’ll do it ‘their own way’