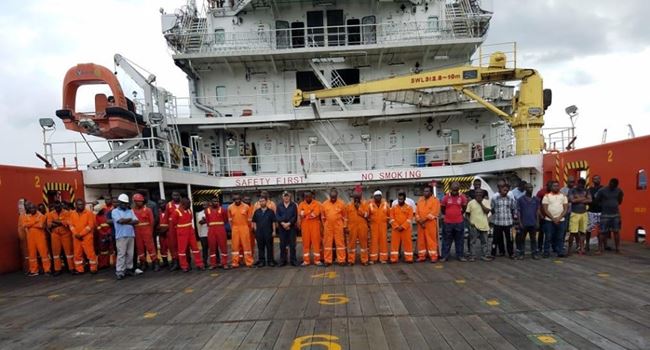 Economic and Financial Crimes Commission (EFCC) said it had commenced investigation of some foreigners alongside other Nigerians who were allegedly involved in illegal oil bunkering in some parts of the country.

The Port Harcourt Zonal Office of the commission announced the development.

The suspects who were 58 in number and their vessels were handed over to the EFCC by the Nigerian Navy Ship (NNS) Pathfinder for further investigation and possible prosecution.

It was alleged that four vessels, one barge and two wooden boats were recovered from the suspects.

The suspects were reported to be on board the vessels when they were intercepted at different dates and locations in Port Harcourt, Rivers, for alleged illegal oil bunkering activities.

Two wooden Boats were intercepted around Onne Anchorage while Barge Hannamarine was intercepted at Okorochiri Creek in Okrika, all in Rivers.

Taking over the suspects and the accompanying vessels, barge and wooden boats, Samuel Umezuirike of the EFCC assured the Nigerian Navy of further investigation and possible prosecution.

The suspects consisted of two foreigners and 56 Nigerians.

100 days in office, Ihedioha continues complaints against Okorocha govt, lists what ex-gov failed to do