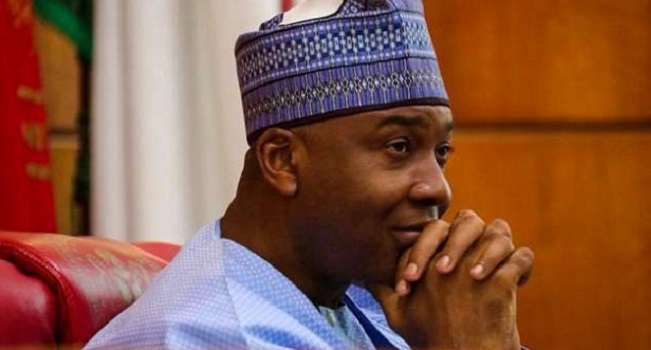 Senate President, Bukola Saraki has described as needless and politically motivated, the recent attempt by the Economic and Financial Crimes Commission (EFCC) to probe into his days as the Governor of Kwara State between 2003 and 2011.

The anti graft agency had written a letter to the Kwara State Government demanding a breakdown of Saraki’s income, as well as his entitlements as governor of the state.

But Saraki, in a statement on Tuesday by his Special Adviser on Media and Publicity, Yusuph Olaniyonu, said the Senate President had been investigated until his last day as the governor of the state.

It added that the “EFCC constituted a fresh team to investigate the Office of the Senate President and despatched another letter late last week to the Clerk of the Senate signed by Mohammed Umar Abba, Director of Operations, in which it requested for the following: “the Certified True Copies of the following: i) All Cash Books, Payment Vouchers, Contract Award Letters, Evidence of Contract Bidding, Agreement and Certificate of Contract Completion from 2015 to date. ii) Certified True Copies of all Financial Retirement made within the same period. iii) Any other information that may assist the Commission in its investigation”.

It said perhaps the Commission was settling scores by blaming the non-confirmation of its acting chairman, Mr. Ibrahim Magu, on the leadership of the Senate.

‘’ Some people who have called Dr. Saraki about the EFCC statement have wondered whether this is the Commission’s way of settling scores by blaming the non-confirmation of its acting chairman, Mr. Ibrahim Magu, on the leadership of the Senate.

”For those who reason in this direction, our response has always been that the decision not to clear Magu was not a personal issue between both men. It was an institutional decision which was taken on a day that the public freely follows the proceedings through live coverage on television.

”This was done to avoid accusations that some people seized the process to deliberately deny Mr. Magu fair hearing,’’ it said.

It explained that Saraki as the Governor of Kwara State was presented a clean bill of health by erstwhile Chairman of the Commisom, Mallam Nuhu Ribadu.

The statement continued, that, “In 2006, the EFCC under Mallam Nuhu Ribadu in a report presented before the Senate gave Kwara State under his tenure a clean bill of health, alongside five other states. At the end of his tenure in 2011, the anti- corruption agency did not find any reason to invite him for any questioning. It was more than a year after he left office when he moved the controversial motion calling for investigation into fuel subsidy that the EFCC first invited him for investigation and nothing came out of that effort.”

It further urged the Commission to stick to professional standards in the discharge of its statutory duties without going after individuals perceived as ”political enemy.”

”While we do not wish to obstruct the EFCC in the performance of its tasks, we reiterate our position that the Commission should be professional, ethical, transparent and consistent.

”It cannot be deemed professional when the agency is not consistent in the application of its rules and the laws to all cases and individuals.

”The recent onslaught against the Senate President by the anti-graft Agency is definitely a case of different laws for different folks.”