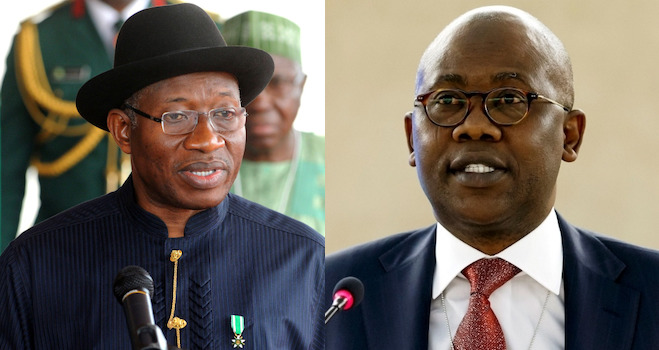 Aliyu Abubakar, a defence witness in the trial-within-trial of the former Attorney-General of the Federation and Minister of Justice, Mohammed Adoke, on Tuesday told the Federal High Court, Abuja, that an Economic and Financial Crimes Commission (EFCC) officer threatened him to indict former President Goodluck Jonathan for alleged money laundering.

Abubakar, who is also a co-defendant in the Adoke’s trial for alleged money laundering, told Justice Inyang Ekwo while being led in evidence by his counsel, Wole Olanipekun (SAN), that the officer, Mr. Bala Sanga, also threatened him to indict the minister.

Adoke was the AGF during President Jonathan’s administration between April 6, 2010 and May 29, 2015.

Aminu Lawal, the second prosecution witness in the trial-within-trial, had on May 10, said that Abubakar was neither enforced to make statements nor induced to implicate others in the course of the investigation, and that he was never threatened to be detained.

Lawal was part of the investigators who took the defendant’s statements on December 31, 2019 and on January 6, 2020.

But at the resumed trial on Tuesday, Abubakar, a business mogul, told the judge that the extra-judicial statements he made on December 31, 2019 and on January 6, 2020 were not made voluntarily.

The defendant said when he was invited to the EFCC’s office on December 31, 2019, Sanga threatened to detain him if he refused to make an extra-judicial statement.

Abubakar said Sanga, who introduced himself as the new prosecutor in the matter, told him that there was evidence that he gave the sum of $20 million to Adoke.

He said: “On December 31, 2019, my lawyer, Ahmed Audu, came to me and said one Ibrahim Ahmed from EFCC called him that they needed clarification from me about this case.

“I followed my lawyer to the EFCC office. When I got there, some of the EFCC’s staff like Ibrahim, Babangida and others came in and told me that I must give a confessional statement.

“They said that things have changed and somebody has to record me (on video), that his name is Bala Sanga.

“He then asked me questions. He asked my lawyer to write for me and I said no that I will not make any more statement because I had already made statements which are with them.

“He said if I don’t, they will detain me.

“I realised the next day was January 1, 2020, that was why I decided that they should write for me.”

Justice Ekwo adjourned the matter till September 28 for hearing.

SocialMediaTrends: How Nigerians reacted to unveiling of ‘new NNPC’ and other stories

ASUU blames Ngige for prolonged strike, vows not to back down