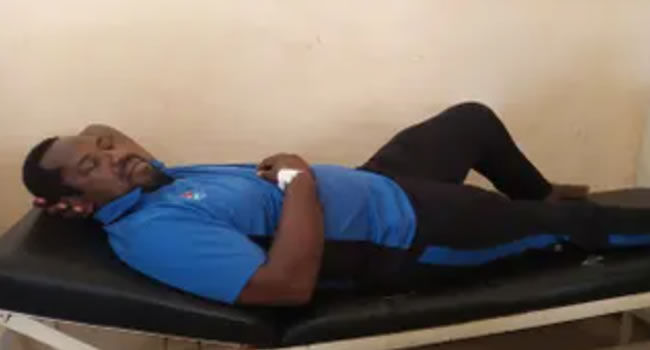 This was confirmed by Gbagir during a press briefing while receiving treatment at the Benue State University Teaching Hospital (BSUTH).

According to the NBA Chairman, trouble started when he went to the EFCC office after receiving a telephone call that one of his colleagues, Barrister Aver Shima, was being held by the EFCC.

“Yesterday, Tuesday 8/6/2021 at about 6:59 pm, Benue State Attorney General and Commissioner for Justice, Michael Gusa Esq, called to intimate me that our colleague who is also the Branch Treasurer was detained by the EFCC.

“On further inquiry, I found that our colleague was detained on the allegation that she gave legal advice to the Chairman of Benue State Universal Basic Education Board (SUBEB) upon which the latter signed a document which is subject of an investigation by EFCC.

“Our said colleague is a law officer with Benue State Ministry of Justice and assigned to offer official legal services to SUBEB. She also Chairs one of the Rent Tribunal Panels.”

He said that on getting to the EFCC office, he met stiff opposition from the security operatives at the gate who also threatened to gun him down.

The NBA chairman said one of the operatives still accosted them and ordered them to leave the place.

“As I made to leave, the personnel of EFCC numbering between seven and above pounced on me and started beating me. They broke my recommended reading eyeglasses in the process and pushed me out of the premises. Outside the premises, they threw out my foot wear which I was dispossessed of in the course of the beating,” he added.

However, the EFCC denied the claims saying the accusations by Gbagir were untrue.

A statement by Bayo Adeniran, a spokesman of the EFCC, said, “We are investigating someone for forgery at SUBEB, and we invited her for an interview. At about 8 pm, some people came in mass after the closing of work led by the NBA Chairman protesting that we should release the woman.

“They were advised to leave EFCC premises in other to pave way for dialogue and eventually the said woman was released to the Permanent Secretary in Ministry of Justice.

“The NBA Chairman was not even around as the time the woman was released and he was never beaten as claimed. EFCC Operatives are always civil in carrying out their official duties,” Adediran stated.

Related Topics:EFCCMakurdiNBA chairman
Up Next

TB Joshua devoted his life for the downtrodden – CAN