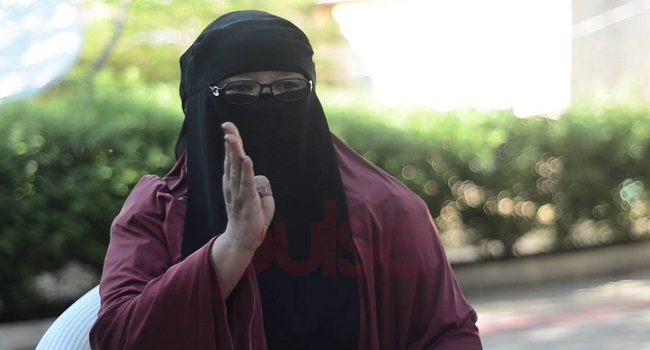 The trial of Aisha Alkali Wakil alias ‘Mama Boko Haram’ who is being prosecuted by the Economic and Financial Crimes Commission, EFCC on a fresh three count criminal charge of conspiracy, inducement and obtaining by false pretence to the tune of N41, 777,750.00 commenced before Justice Aisha Kumaliya of the Borno State High Court, Maiduguri Tuesday, January 26, with the prosecution calling its first witness, PW1, Bilkisu Muhammed Abubakar, who was allegedly induced by the defendants to execute over N41m supply contract for Complete Care and Aid Foundation, owned by Wakil, but refused to pay.

Led in evidence by the prosecuting counsel, Mukhtar Ali Ahmed, the PW1 narrated how supplies contracts were awarded to her by Mama Boko Haram and Tahiru Alhaji Saidu Daura, the chief executive officer and programme manager respectively of Complete Care and Aid Foundation and Complete Care respectively.

According to the witness,: “I worked as a volunteer in the Organisation for two years during which I was engaged to make supplies of beverages and toiletries to the NGO and later to the home of Wakil, even though I told them I was not a contractor.

“I was also buying lunch for Wakil and her daughter, one Khadija Alkali, for four straight months.

“I was asked by Wakil and Daura to write down whatever item I supplied to them. Subsequently, I also furnished the house of Wakil based on request by her; I supplied everything in the house”.

PW1 further told the court that: “I supplied one Italian bed, a complete set of show glass, two centre tables, one Italian dining table and one cushion chair to her husband. She also asked me to supply four beds, five big mattresses and sixteen pillows to be used by her husband and children.

“Wakil also directed me to transfer money to one Ekechukwu Modo to buy her foodstuffs from Enugu. I transferred money in five tranches to Modo’s First Bank account and to one Harira in Malaysia for the purchase of Arabian gown.

“My lord, during the naming ceremony of Wakil’s grandchild, I supplied all the things needed to the tune of N1.5M”.

The witness further revealed that, Mama Boko Haram, after much pleading paid the sum of N10m into her account for every item supplied and services rendered but refused to pay the balance of N31.7m.

The prosecution counsel, Mukhtar Ali Ahmed tendered the Letter of Award of Contract for the supplies, Store Certification, Notification of Delay in Payment, Letter of Introduction and Authorization for the transfer of N1.5M which were all admitted in evidence by the court.

Forty different receipts issued to Bilkisu, tellers and a hand writing documents of items bought by the vendor were also admitted in evidence.

Justice Kumaliya, after listening to the testimony of the PW1, ordered that the proceedings recorded by the court be transmitted to the defendants for study and cross examination of the prosecution witness due to the absence of their counsel.

The trial was adjourned till February 15, 2021 for cross examination of prosecution witness.

One of the counts reads: “That you Aisha Alkali Wakil, Tahiru Saidu Daura and Prince Lawal Shoyede whilst being Chief Executive Officer, Programme Manager and Country Director respectively of Complete Care and Aid Foundation (Non-Governmental Organisation) sometimes in June 2018 at Maiduguri, Borno State within the jurisdiction of this Honourable Court, dishonestly induced one Haija Bilkisu Mohammed Abubakar of Ihasan Venndor Services, to deliver to you; House Furniture, electronics and food items worth N34, 593, 000.00 (Thirty Four Million Five Hundred and Ninety Three Thousand Naira) only under the guise of executing a contract for the supply of the said items to Complete Care and Aid Foundation (Non-Governmental Organisation) and thereby committed an offence contrary to Section 320 (a) and Punishable under Section 322 of the Penal Code Cap 102 Laws of Borno State.”