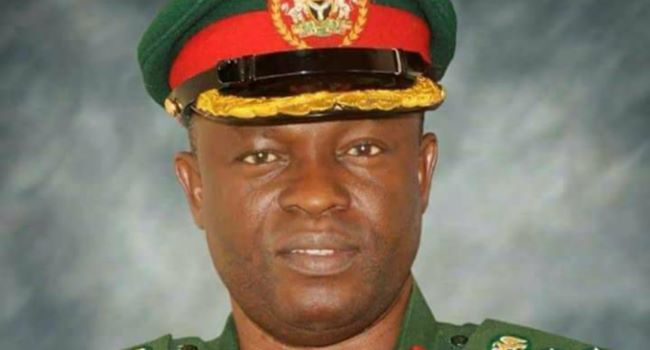 The Economic and Financial Crimes Commission (EFCC) has secured a temporal forfeiture order against the $376,120 seized from Major General Hakeem Otiki, to the Federal Government.

A Federal High Court in Abuja gave the order following an ex-parte application brought by the EFCC before the court.

Counsel to the EFCC, Ekele Iheanacho, had told the court that the fund which was estimated at about N136,155,440 was part of proceeds of corruption.

The anti-corruption agency also stated that Otiki had sometimes last year, detailed some soldiers to provide VIP escort from Sokoto to Kaduna for one Alhaji Ado Aliyu, alongside the sum of N400 million, adding that the soldiers fled with the money with their whereabouts unknown.

The EFCC, in a supporting affidavit that was deposed to by a lead investigator, Alvan Gurumnaan, said it had carried out investigations based in the intelligence it received.

“Major General Otiki was a serving military officer and the immediate-past General Officer Commanding Division of the Nigerian Army, Sokoto. He was the chief accounting officer of the division.

“That one Alhaji Ado, together with his son, Adamu Aliyu, is into the business of Bureau De Change (BDC). They are business associates of Major General Otiki as they assisted him (Otiki) in operating his BDC business known as Karama BDC.

“The office addresses of the BDC and hotel are respectively in Lagos and Ibadan”, the agency said in the affidavit.

The EFCC also alleged that Otiki was the sole signatory of the bank accounts of the said companies in Jaiz Bank, UBA Plc, FCMB Plc and Access Bank Plc adding that he had, despite his uncovered involvement, denied having any enterprise or shares in any company in Nigeria in the assets declaration form he completed and submitted in 2016.

“To facilitate the above unofficial transaction, Major General Otiki provided detailed military security escort for Alhaji Ado from Kaduna to Sokoto and back to Kaduna.

“That he Nigerian Army Headquarters specifically released special intervention funds to the 8 Division of the Nigerian Army headed by Major General Otiki for the purpose of improving on the infrastructure within the said 8 Division,” he said.

The Army General is currently facing a court martial.

The case was adjourned till February 24.