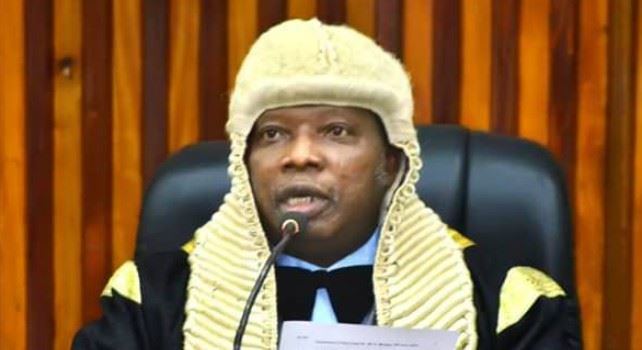 The Economic and Financial Crimes Commission (EFCC) has slammed an 11 count charge bordering on money laundering, stealing, forgery and conspiracy against the embattled Speaker of the Ogun State House of Assembly, Olakunle Oluomo, and three others.

The charges, filed by Rotimi Oyedepo, the Lagos Head of Legal Monitoring Unit of the anti-graft agency, will be presented at the Federal High Court in Abeokuta, Ogun State, on Monday, according to the agency.

In a statement on its website, the EFFC noted some of the charges like Count 1 which reads;

“that you Oluomo Olakunle Taiwo, Oladayo Samuel, Adeyemo Adedeji Taiwo and Adeyanju Nimota Amoke (now at large) sometimes in 2019 in Abeokuta within the jurisdiction of this honorable Court conspired amongst yourselves to use the total sum of N2,475,000,000,000.00 (Two Billion, Four Hundred and Seventy Five Million Naira) which sum you reasonably ought to have known forms part of the proceeds of your unlawful activity to wit: stealing from the treasury of Ogun State House of Assembly and you thereby committed an offence contrary to sections 18 (a), 15 (2) (d) of the Money Laundering Prohibition Act, 2011 as amended and punishable under section 15 (3) of the same Act.”

Oluomo was arrested by operatives of the EFCC on Thursday, September 1, at the Murtala Mohammed Airport, Ikeja, Lagos, over allegations of offences bordering on financial crimes.

He was taken to the agency’s Ikoyi office for interrogation before he was flown to Abuja later in the day.

The following day, he was released on bail but was expected to return to the Lagos office of the commission on Monday, September 5, with other officials of the State House of Assembly, including the clerk and accountant for further questioning.

ANALYSIS: As Ayu fights the PDP curse of disgracing its national chairman out of office

‘Fani-Kayode a notorious political scavenger whose god is his belly,’ Dino Melaye fires back at ex-minister