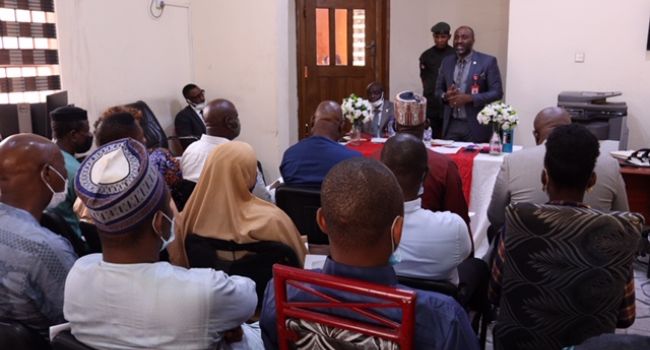 The Ilorin Zonal Commander of the Economic and Financial Crimes Commission (EFCC) ACE II Michael Nzekwe, has warned hotel owners to avoid being accomplice to Yahoo Boys who check into their facilities for internet fraud and money laundering activities or risk being prosecuted and jailed.

Nzekwe gave the admonition on Thursday, while addressing a stakeholders meeting of Designated Non-Financial Institutions (DNFIs) at the Commission’s Office along Catchment Road, GRA, Ilorin.

According to him, “the Commission has observed a worrying pattern of cold complicity by hospitality entrepreneurs who appear to be hands-in-gloves with suspected fraudsters by housing them over long spells and making internet facilities available to them”.

Warning hoteliers against allowing cybercriminals into their facilities, the Zonal Commander said that hoteliers would be contravening Section 3 of the Advance Fee Fraud and Other Fraud Related Offences Act if they continue to allow Yahoo Boys to check into their hotels.

“Section 3 of the Advance Fee Fraud and Other Related Offences Act, 2006 provides for a prison term of between five and 15 years without option of fine for any person who permits his premises to be used for any offence under the Act”, he stated.

According to him, the meeting was called to sensitize stakeholders on the rising activities of fraudsters and the need to support the Commission in the fight against corruption. He said that ignorance was not an excuse under the law. “While the argument is being made in certain quarters that hoteliers as business people have no means of determining who a fraudster is before allowing them to lodge in their facilities, that position runs counter to the law”, he said.

He urged the hoteliers to always ask their customers for means of identification and to fill their occupation as part of the check-in procedure.

The Zonal Commander also implored them to support the Commission with credible and actionable information, adding that such information when received would be treated with absolute confidentiality.

The President of Hotel Owners Association, Kwara State, Mr. Dauda Akande and Chief Isaac Omogbenle Adeyemi, the immediate past chairman of the Association mentioned some of the challenges faced by hotel owners in dealing with customers. These included concealment of identity by guests, difficulty in determining a fraudster before allowing them to lodge in their facilities and safety of whistle blowers among others.

They commended the EFCC for its professionalism and doggedness in the anti-graft war, while pledging their support for the Commission in its bid to stem the scourge of corruption in Nigeria.

Earlier on Wednesday, June 15, 2022 the Zonal Commander had urged compliance officers of banks to be diligent in the discharge of their duties and to ensure that they play active role in tackling money laundering and other fraudulent practices in the banking sector.

He frowned at the actions of some bank officials, who aid and abet money laundering activities and other economic and financial crimes, describing such acts as “a sign of systemic abuse and failure on the part of such banks”.

According to him, “there is no major fraud especially money laundering that is ever committed without the connivance of the bank officials, and such must be discouraged”.

Participants at the meeting assured the EFCC of their support by offering necessary information that could assist it in fighting corruption.