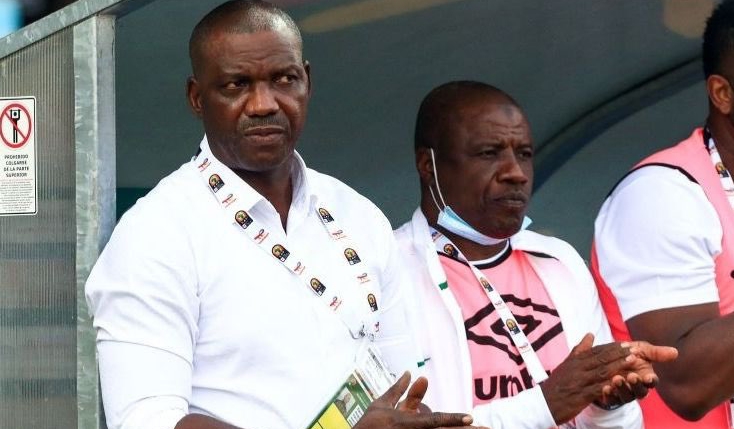 The technical director of the Nigeria Football Federation (NFF), Austin Eguavoen alongside his committee members have been mandated to make recommendations for new Super Eagles coaches.

The national men’s football team have been without leadership since last month after the NFF terminated the contracts of all members of the team’s technical crew.

The move followed the failure of the team to secure a ticket to the 2022 FIFA World Cup billed to hold in Qatar between 21 November and 18 December.

Apart from the coaches for the Super Eagles, the committee will also be making recommendations for the heads of other national men’s teams, including CHAN Eagles, Flying Eagles as well as the Golden Eaglets.

At a meeting meeting held on Tuesday in Abuja and attended both physically and virtually by 14 members, the NFF asked the Technical and Development Sub-Committee to make the recommendations.

“The Executive Committee mandated its technical and development sub-committee to within five days make recommendations to the Executive Committee on coaching crews for the Super Eagles, the CHAN team, the U20 Boys (Flying Eagles) and the U17 Boys (the Golden Eaglets) ahead of upcoming assignments,” reads the communique.

“This is to ensure preparations for the next qualifying tournaments and championships commence in earnest.”

The Super Eagles were led on an interim basis by Eguavoen between December 2021 and March 2022 following the sack of former boss, Gernot Rohr.

Eguavoen’s Eagles crashed out in the round of 16 of the Africa Cup of Nations held in Cameroon earlier in the year, and also failed to go past Ghana in the World Cup playoff to seal a place in Qatar.

While Eguavoen had stepped down from the interim position after failure to seal a World Cup ticket, he remains the technical director of the Nigerian football body.

Super Falcons in Canada for friendly games in preparation for AWCON