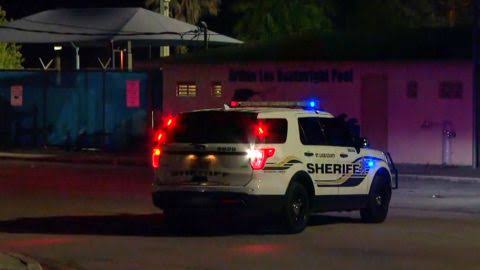 United States police has confirmed a
mass shooting at a Martin Luther King Jr. Day event in Florida where at least eight people were gunned down.

St. Lucie County Chief Deputy Brian Hester, who addressed reporters on Tuesday morning, said shots were fired during an “MLK Car Show & Family Fun Day” at Fort Pierce’s Ilous Ellis Park on Monday night, with “at least eight people struck by bullets and later sent to a hospital for treatment, with one person in critical condition.”

“Additional victims were injured after being trampled by the panicked crowd. All of those injured are expected to survive,” the police chief said.

“Right now we have eight people that we know of that are at the hospital that were shot. We had another two individuals that were injured during the accident, just kind of during the melee afterward…hit by a car or trampled by the crowd as people were just scattering everywhere,” Hester said.

Hester described the scene as “very chaotic” when the shooting began at around 5:20 p.m., with attendees “running in all different directions.”

“Despite the chaos, first responders and other attendees were able to provide aid for the victims shortly after the shooting took place.

“It was kind of hard to tell who was a victim and who was just hiding at that point. But our deputies did start to render aid on multiple people. There were people in the crowd that were rendering aid as well.

“No suspects had been apprehended in connection with the shooting at the time of publication, but the police is busy following up on tips from the community and detectives were looking into multiple leads,” he said.