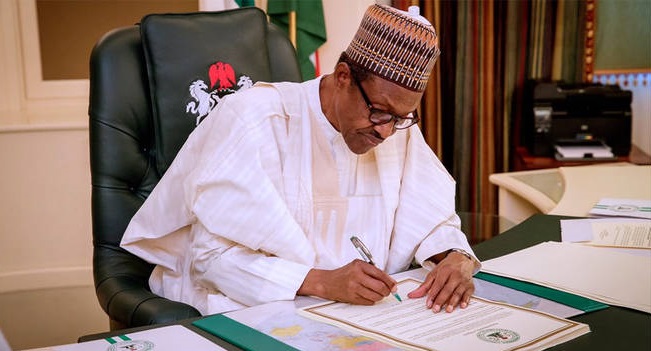 There was a general sigh of relief from Nigerians and political watchers after President Muhammadu Buhari finally signed into law the Electoral Act Amendment Bill on February 25, bringing an end to speculations and insinuations that he would not sign the Bill.

Sceptical Nigerians would be forgiven for being pessimistic. Their positions were based on the President’s earlier stance on the Bill and his reluctance in signing it into law.

It is on record that President Buhari had withheld his assent to the Electoral Act Amendment Bill a total of five times between February 2018 to November 2021, always coming up with one reason or the other on why he would not sign it.

So, it was all round victory; for the country’s electoral process, the National Assembly, the President and Nigerians generally, when Buhari did the needful and finally gave his assent to the Bill, which Nigerians believe will usher in a new era in giving the country hope for a better organized electoral process going forward.

In the final analyses, here are eight takeaways from the newly signed Electoral Act by President Buhari.

The amended Electoral Act Bill gives room for early conduct of party primaries and early submission of candidates’ list as captured in Clause 29(1) of the 2022 electoral bill.

A clause in the newly signed Electoral Act gives political parties the freedom to choose the form of primary that suits them, which could be by direct or indirect primary, or by a consensus whereby a particular candidate is declared unopposed, thus bringing to an end one of the contending issues that made President initially withhold his assent to the Bill.

In Clause 94 of the new Electoral Bill, the period for campaigns by political parties has been extended from “90 to 150 days before the election day, and must be rounded up 24 hours before the polling day.”

The newly signed Electoral Act has a clause where the federal government must release election funds to INEC not later than one year before a general election.

This is contained in Clause 3(3) of the Act which “provides that all funding required for a general election is released not later than one year before the general elections.”

Political observers view this particular clause as very needful as this will help the electoral umpire to be better prepared in advance instead of running cap in hand to the government of the day.

The electronic transmission of election results has been another sore point in Nigeria’s political sphere and a cause for dissenting debates in the National Assembly, but the new electoral act has effectively taken care of that.

Section 50 of the Act allows INEC to determine the procedure for voting at an election as well as the transmission of results, either electronically or manually.

Clause 47 of the Electoral Bill also allows voters to be electronically accredited using Smart Card Readers or any other technical equipment determined by INEC.

To curb against incidents where returning officers are forced to declare election results under duress, Clause 65 of the new Electoral Bill has empowered INEC with the “authority to evaluate declarations and returns made under dubious circumstances.”

By this measure, it is believed that such manipulations which could alter the results management process, has been taken care of, thereby “discouraging politicians from pressuring INEC staff to declare manufactured election results that can only be disputed in court.”

Another key takeaway from the newly signed Electoral Act is the prohibition of “unnecessary substitution of candidates by political parties.”

According to Section 33 of the Act, political parties are not allowed to change or substitute a candidate whose name has been submitted to the Commission.

However, the only proviso which the Act allows for such to happen is if “the candidate dies prior to the election” and in such a scenario, Section 34 of the Act allows the political parties power to conduct a fresh primary election to replace the “deceased candidate who dies after the polls have begun but before the final results are announced and a winner is declared.”

Clause 84 of the new Electoral Act stipulates that “anyone holding a political office – ministers, commissioners, special advisers, and others – must relinquish the position before they can be eligible to participate in the electoral process either as a candidate or as a delegate.”

Further more, Clause 8(5), grants political neutrality to INEC personnels and what this means is that a politician or member of a political party cannot be an INEC official at the same time.

The particular clause stipulates sanctions on such erring INEC official and states that any “INEC official with political affiliations commits an offence and is subject to a fine of N5,000,000 or imprisonment for a term not exceeding two years, or both, if convicted.”

However, there is a particular clause President Buhari complained about and has urged the National Assembly to rework that particular section.

The Section of the bill, Clause 84(12), reads: “No political appointee at any level shall be voting delegate or be voted for at the Convention or Congress of any political party for the purpose of the nomination of candidates for any election.”

The President, however, believes the provision in this Clause is in conflict with “extant constitutional provisions and constitutes a disenfranchisement of serving political office holders from voting or being voted for at conventions or congresses of any political party, for the purpose of the nomination of candidates for any election in cases where it holds earlier than 30 days to the national election.”

REVIEW… Abba Kyari: The rise and fall of a super cop gone rogue