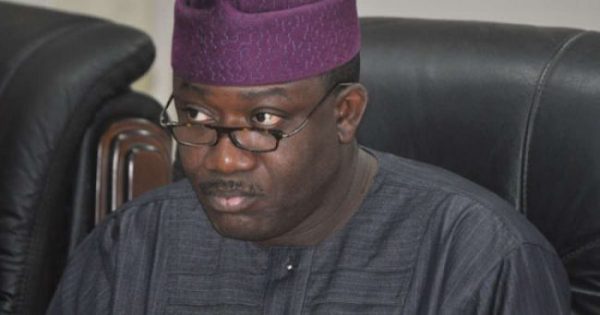 Minister of Mines and Steel Development and governorship aspirant of the All Progressives Congress (APC) in Ekiti State, Kayode Fayemi, has condemned the disruption of the party’s governorship primary election by suspected thugs believed to be working for some aspirants in the race.

In a statement issued on his behalf by Yinka Oyebode, his media aide, Fayemi accused Babafemi Ojudu, a former senator, and Bimbo Daramola, an ex-member of the House of Representatives of desperation, stating that the party did not deserve the type of ridicule it was subjected to.

Fayemi claimed he secured the highest votes in the botched primary, stating that those behind the disruption were faced with certain defeat.

The minister, who said he was not surprised by the disruption of the exercise, disclosed that the security agencies had been notified of plans by some aspirants to deploy hoodlums to disrupt the voting exercise, with the agencies promising to strengthen security at the venue.

“It is quite painful seeing some desperate elements trying so much to rubbish the party we all laboured to build to national reckoning, out of share lust for power,” he said.

“If the quest for political position is to serve, then one wonders why the desperation being displayed by the likes of Femi Ojudu and Bimbo Daramola.

“Certainly the conduct of these desperate aspirants falls short of the minimum standards expected of anyone that professes progressive ideals. We urge our teeming supporters and loyal party members not to be discouraged by this despicable act. This surely shall pass, and better days are ahead. Our collective rescue mission has indeed begun.”

Meanwhile, outgoing Governor of Ekiti State, Ayodele Fayose, has described the violence which marred the primary election as shameful.

Fayose said the outcome of the primary was proof the APC would lose the governorship election.

“The violence that marred today’s All Progressives Congress (APC) governorship primary election is shameful and a clear indication that the APC will fail woefully in the July 14 governorship election because apart from its rejection by Ekiti people, the party has become a house divided against that can never hold,” he said in a statement on his behalf by Lere Olayinka, special assistant on public communication and new media.

“The whole world can now see the so-called progressives. Ordinary primary election, they can’t hold. It is shameful!”

“If the party could be this violent during their own primary election, won’t they do worse things during the election proper?

“INEC should therefore be mindful of being used to manipulate the July 14 election in favour of APC because the party has today, lost the election by the open advertisement of its anti-democratic credentials.”

Nigerians know that unlike the past, APC gov’t is sincere about serving them- Osinbajo